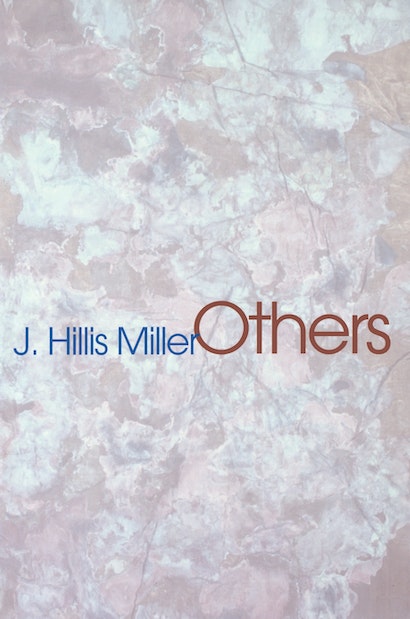 This volume fulfills the author’s career-long reflections on radical otherness in literature. J. Hillis Miller investigates otherness through ten nineteenth- and twentieth-century authors: Friedrich Schlegel, Charles Dickens, George Eliot, Anthony Trollope, Joseph Conrad, W. B. Yeats, E. M. Forster, Marcel Proust, Paul de Man, and Jacques Derrida. From the exquisite close readings for which he is celebrated, Miller reaps a capacious understanding of otherness — one reachable not through theory but through literature itself.


Otherness has wide valence in contemporary literary and cultural studies and is often understood as a misconception by hegemonic groups of subaltern ones. In a pleasing counter to this, Others conceives of otherness as something that inhabits sameness. Instances of the ”wholly other” within the familiar include your sense of self or your beloved, your sense of your culture as such, or your experience of literary, theoretical, and philosophical works that belong to your own culture — works that are themselves haunted by otherness.


Though Others begins and ends with chapters on theorists, the testimony they offer about otherness is not taken as more compelling than that of such literary works as Dicken’s Our Mutual Friend, Conrad’s ”The Secret Sharer,” Yeats’s ”Cold Heaven,” or Proust’s Remembrance of Things Past. Otherness, as this book finds it in the writers read, is not an abstract concept. It is an elusive feature of specific verbal constructs, different in each case. It can be glimpsed only through close readings that respect this diversity, as the plural in the title — Others — indicates.


We perceive otherness in the way that the unseen — and the characters’ emotional responses to it — ripples the conservative ideological surface of Howard’s End. We sense it as chaos in Schlegel’s radical concept of irony. And we gaze at it in the multiple personifications of Heart of Darkness. Each testifies in its own way to the richness and tangible weight of an otherness close at hand.

J. Hillis Miller is Distinguished Professor of English and Comparative Literature at the University of California, Irvine. He is the author of many books, including Topographies, Reading Narrative, Ariadne's Thread, Versions of Pygmalion, and The Linguistic Moment: From Wordsworth to Stevens (Princeton).

"A book by J. Hillis Miller, one of the most influential and productive of American critics of the past four decades, has a special significance: readers familiar with his work want to know how his thinking is developing and look forward to his combination of astute close reading and theoretical awareness. Here, as always, a major strength of Miller's writing is his insightful and sensitive reading of literary works. His theoretical interests are placed at the service of careful literary interpretation, and the reader finds again and again that a work or a passage has been illuminated by his judicious remarks."—Derek Attridge, University of York

"One has become spoiled over the decades by J. Hillis Miller's own brand of critical thinking. Like his other books, Others will be read not only by those interested in the particular authors he addresses, but also and especially by anyone interested in the literary enterprise in general. The exemplary quality of the interpretive act that is performed, as well as Miller's lucidity make this book appealing to a very broad audience."—Carol Jacobs, New York University