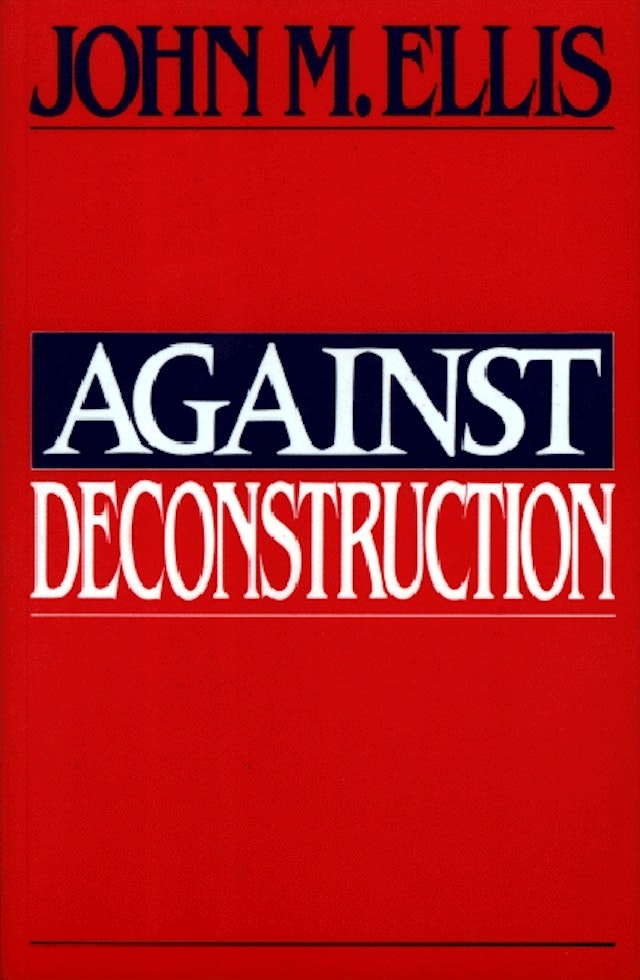 “The focus of any genuinely new piece of criticism or interpretation must be on the creative act of finding the new, but deconstruction puts the matter the other way around: its emphasis is on debunking the old. But aside from the fact that this program is inherently uninteresting, it is, in fact, not at all clear that it is possible… . [T]he naïvetê of the crowd is deconstruction’s very starting point, and its subsequent move is as much an emotional as an intellectual leap to a position that feels different as much in the one way as the other… .” — From the book

"Ellis argues with force and clarity. . . . [He] concludes that what Deconstruction provides is largely an emotional bonus—it gives its adherents 'a routine way to a feeling of being excitedly shocking.' They get the feeling that might attend a genuine piece of original thinking, but here it can be achieved without comparable effort."—London Review of Books

"Ellis's elegant and absolutely unsentimental book can serve as a sort of solvent in today's critical debates. Not much remains intact: binary oppositions, 'alternative logic,' texts as 'play,' and 'performance,' are all subject to rigorous examination. In the process, Ellis lucidly restores Saussurean categories (so battered and reduced in contemporary criticism) to their original complexity. Appalled by the growth of a class of critics who appear to risk nothing when they take on a literary text, Ellis challenges every reader under the spell of new vocabularies to stop and think. Rarely has scholarly exasperation been put to better or more timely use."—Caryl Emerson, Princeton University