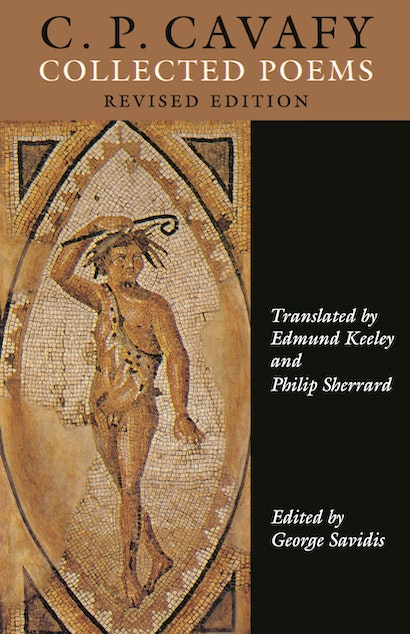 Buy This
C. P. Cavafy (1863–1933) lived in relative obscurity in Alexandria, and a collected edition of his poems was not published until after his death. Now, however, he is regarded as the most important figure in twentieth-century Greek poetry, and his poems are considered among the most powerful in modern European literature. Here is an extensively revised edition of the acclaimed translations of Edmund Keeley and Philip Sherrard, which capture Cavafy’s mixture of formal and idiomatic use of language and preserve the immediacy of his frank treatment of homosexual themes, his brilliant re-creation of history, and his astute political ironies. The resetting of the entire edition has permitted the translators to review each poem and to make alterations where appropriate. George Savidis has revised the notes according to his latest edition of the Greek text.
George Savidis (1929–1995) was professor of modern Greek at the University of Thessaloniki and George Seferis Visiting Professor at Harvard University. Edmund Keeley (1928–2022) was the Charles Barnwell Straut Class of 1923 Professor of English, emeritus, and professor emeritus of creative writing at Princeton University. Philip Sherrard (1922–1995) was research fellow at St. Antony’s College, Oxford, and lecturer in the history of the Orthodox Church at King’s College London.

“The best [English version] we are likely to see for some time.”—James Merrill, New York Review of Books

“[Keeley and Sherrard] have managed the miracle of capturing this elusive, inimitable, unforgettable voice. It is the most haunting voice I know in modern poetry.”—Walter Kaiser, New Republic

“Among the key books of our century and should be read by anyone who cares for poetry.”—Washington Post Book World