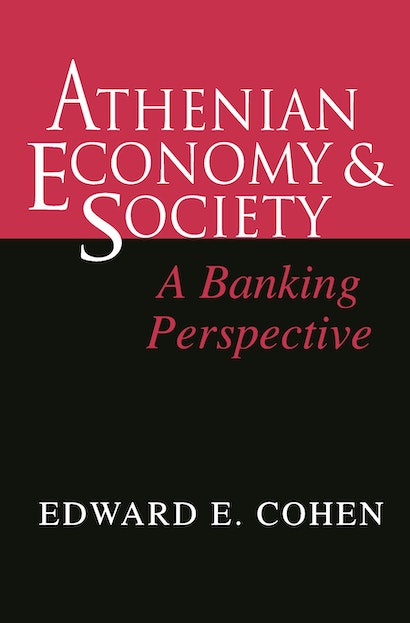 In this ground-breaking analysis of the world’s first private banks, Edward Cohen convincingly demonstrates the existence and functioning of a market economy in ancient Athens while revising our understanding of the society itself. Challenging the “primitivistic” view, in which bankers are merely pawnbrokers and money-changers, Cohen reveals that fourth-century Athenian bankers pursued sophisticated transactions. These dealings — although technologically far removed from modern procedures — were in financial essence identical with the lending and deposit-taking that separate true “banks” from other businesses. He further explores how the Athenian banks facilitated tax and creditor avoidance among the wealthy, and how women and slaves played important roles in these family businesses — thereby gaining legal rights entirely unexpected in a society supposedly dominated by an elite of male citizens.


Special emphasis is placed on the reflection of Athenian cognitive patterns in financial practices. Cohen shows how transactions were affected by the complementary opposites embedded in the very structure of Athenian language and thought. In turn, his analysis offers great insight into daily Athenian reality and cultural organization.

Edward E. Cohen is Chairman of the Executive Committee at JeffBanks, Inc., a bank-holding company based in Philadelphia. He holds a Ph.D. in classics from Princeton University and is author of Ancient Athenian Maritime Courts (Princeton).

"Cohen embodies a role of traditional relevance in research on classical antiquity, but one that is increasingly a rarity: he is a 'man of affairs' who brings his practical, professional experience to bear on his historical research.... [He] has now given us a very fine book on ancient banking, a work that has been well worth the wait."—Thomas J. Figueira, Bryn Mawr Classical Review

"[Cohen] possesses an impressive knowledge of the relevant classical and modern literature as well as a close practical acquaintance with contemporary banking, an unusual but fortuitous set of qualifications. . . . Highly readable and contains a wealth of interesting details on social conditions generally."—John R. Love, American Historical Review

"A thoroughly documented and imaginatively argued book that will mark a new stage in the study of Athenian banking."—David C. Mirhady, Classical World