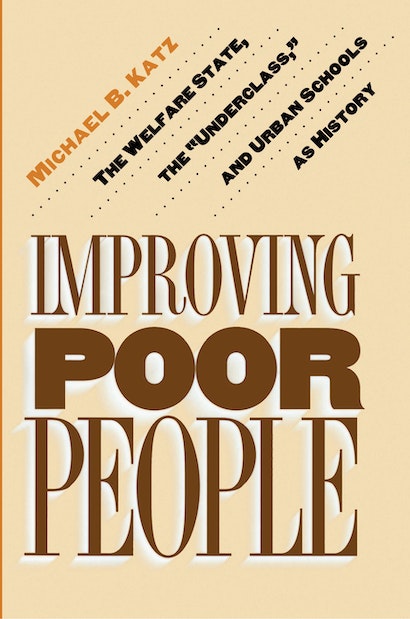 “There are places where history feels irrelevant, and America’s inner cities are among them,” acknowledges Michael Katz, in expressing the tensions between activism and scholarship. But this major historian of urban poverty realizes that the pain in these cities has its origins in the American past. To understand contemporary poverty, he looks particularly at an old attitude: because many nineteenth-century reformers traced extreme poverty to drink, laziness, and other forms of bad behavior, they tried to use public policy and philanthropy to improve the character of poor people, rather than to attack the structural causes of their misery. Showing how this misdiagnosis has afflicted today’s welfare and educational systems, Katz draws on his own experiences to introduce each of four topics — the welfare state, the “underclass” debate, urban school reform, and the strategies of survival used by the urban poor. Uniquely informed by his personal involvement, each chapter also illustrates the interpretive power of history by focusing on a strand of social policy in the nineteenth and twentieth centuries: social welfare from the poorhouse era through the New Deal, ideas about urban poverty from the undeserving poor to the “underclass,” and the emergence of public education through the radical school reform movement now at work in Chicago.


Why have American governments proved unable to redesign a welfare system that will satisfy anyone? Why has public policy proved unable to eradicate poverty and prevent the deterioration of major cities? What strategies have helped poor people survive the poverty endemic to urban history? How did urban schools become unresponsive bureaucracies that fail to educate most of their students? Are there fresh, constructive ways to think about welfare, poverty, and public education? Throughout the book Katz shows how interpretations of the past, grounded in analytic history, can free us of comforting myths and help us to reframe discussions of these great public issues.

Michael B. Katz is Stanley I. Sheerr Professor of History at the University of Pennsylvania. Among his many works are In the Shadow of the Poorhouse: A Social History of Welfare in America and The Undeserving Poor: From the War on Poverty to the War on Welfare. He is the editor of The "Underclass" Debate: Views from History (Princeton).

"As a concise overview of twenty-five years of writing on poverty, welfare, and public education, this is an exceptionally valuable and important book....It will be read widely by social scientists, policy makers, and concerned citizens."—Molly Ladd-Taylor, Journal of American History

"A must reading for all social workers ... interested in the current debate about the role of government in social welfare. Katz's keen historical analysis informs us what our response to need has been and poses questions that we need to ask to avoid future errors."—Edward J. Gumz, Families in Society

"A provocative, stimulating exploration that clarifies which approaches in the ever-contentious debate over the "right" approach to poverty are genuinely new and which are generations old."—Booklist

"No historian has written more wisely on urban poverty and social welfare policy in this country, and [Katz] is at his commanding best here."—Kai Erikson, The Nation

"Michael Katz is perhaps the premier historian of American social welfare. And in the case of his work, it really is true that an understanding of the past illuminates the present, and especially the present debacle over welfare reform."—Frances Fox Piven

"Michael Katz is not just the leading historian of urban poverty and social policy in the United States; he is of that rare breed of scholars who believes in changing the world he interprets. And as he demonstrates in these powerful, moving essays on welfare reform, the 'underclass' debate, and urban education, interpreting the past is not only essential for creating a different future but often just as difficult. By consistently putting people at the center of the story—their actions, their mistakes, their conflicts, their visions—Katz reminds us why grand theories or single-issue panaceas cannot stand in for careful historical research. His deeply personal account of his struggle to straddle the worlds of academics and activism adds a rich dimension to an already razor-sharp and hardnosed analysis. Anyone truly concerned about the plight of America's inner cities must read this book."—Robin D. G. Kelley, author of Race Rebels: Culture, Politics and the Black Working Class