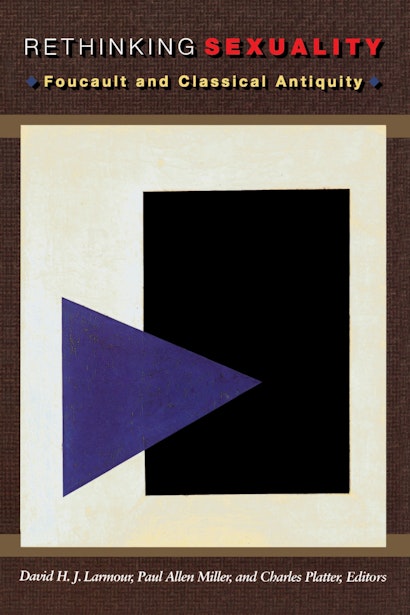 In this collection of provocative essays, historians and literary theorists assess the influence of Michel Foucault, particularly his History of Sexuality, on the study of classics. Foucault’s famous work presents a bold theory of sexuality for both ancient and modern times, and yet until now it has remained under-explored and insufficiently analyzed. By bringing together the historical knowledge, philological skills, and theoretical perspectives of a wide range of scholars, this collection enables the reader to explore Foucault’s model of Greek culture and see how well his interpretation accounts for the full range of evidence from Greece and Rome. Not only do the essays bring to light the assumptions, ideas, and practices that constituted the intimate lives of men and women in the ancient Mediterranean world, but they also demonstrate the importance of the History of Sexuality for fields as diverse as Greco-Roman antiquity, women’s history, cultural studies, philosophy, and modern sexuality.


The essays include “Situating The History of Sexuality” (the editors), “Taking the Sex Out of Sexuality: Foucault’s Failed History” (Joel Black), “Incipit Philosophia” (Alain Vizier), “The Subject in Antiquity after Foucault” (Page duBois), “This Myth Which Is Not One: Construction of Discourse in Plato’s Symposium” (Jeffrey S. Carnes), “Foucault’s History of Sexuality: A Useful Theory for Women?” (Amy Richlin), “Catullan Consciousness, the ‘Care of the Self,’ and the Force of the Negative in History” (Paul Allen Miller), “Reversals of Platonic Love in Petronius’ Satyricon” (Daniel B. McGlathery), and an essay from Dislocating Masculinity (Lin Foxhall).

"Ultimately, this collection of essays represents a turning point in classical scholarship, in that it calls for an examination of what classics as a discipline might do if it would admit Foucault into the realm of philology."—Bryn Mawr Classical Review

"This volume of rich and varied essays offers a range of stimulating insights into Foucault's encounters with classical antiquity on matters of sexuality and the body.... Not least among the virtues of this collection is the close analysis of literary and philosophical works by some of the best-known classical authors of Greece and Rome, such as Sappho, Plato, Petronius, and Catullus, read here with and against Foucault's ideas."—Froma I. Zeitlin, Princeton University