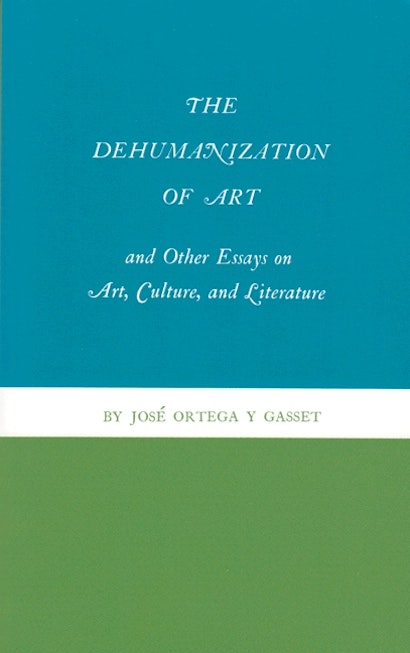 No work of Spanish philosopher and essayist José Ortega y Gasset has been more frequently cited, admired, or criticized than his defense of modernism, “The Dehumanization of Art.” In the essay, originally published in Spanish in 1925, Ortega grappled philosophically with the newness of nonrepresentational art and sought to make it more understandable to a public confused by it. Many embraced the essay as a manifesto extolling the virtues of vanguard artists and promoting their efforts to abandon the realism and the romanticism of the nineteenth century.


The “dehumanization” of the title, which was meant descriptively rather than pejoratively, referred most literally to the absence of human forms in nonrepresentational art, but also to its insistent unpopularity, its indifference to the past, and its iconoclasm. Ortega championed what he saw as a new cultural politics with the goal of a total transformation of society.


Ortega was an immensely gifted writer in the best belletristic tradition. His work has been compared to an iceberg because it hides the critical mass of its erudition beneath the surface, and because it is deceptive, appearing to be more spontaneous and informal than it really is.


Princeton published the first English translation of the essay paired with another entitled “Notes on the Novel.” Three essays were later added to make an expanded edition, published in 1968, under the title The Dehumanization of Art and Other Essays on Art, Culture and Literature .