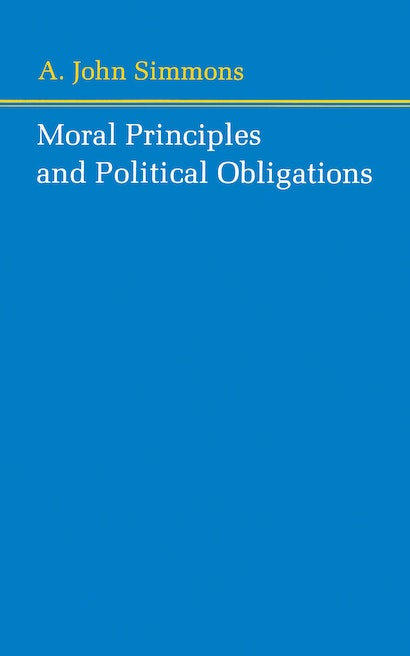 Outlining the major competing theories in the history of political and moral philosophy — from Locke and Hume through Hart, Rawls, and Nozick — John Simmons attempts to understand and solve the ancient problem of political obligation. Under what conditions and for what reasons (if any), he asks, are we morally bound to obey the law and support the political institutions of our countries?

"This devastating book asks why citizens should feel obligated to participate in the political order and be responsive to its demands. Simmons lines up theorists like targets and bops one after another. 'Fair Play', 'Tacit Consent', 'Natural Duty of Justice' are all in trouble, whether offered by Rawls or Nozick or anyone else. That does not mean that Virginia Professor Simmons opts for the jungle; he simply has left few grounds for political obligations and suggests that somehow people will have to salvage some moral obligations instead. An astute work of demythologization and demolition."—The Christian Century

"(A) major contribution to political philosophy. . . . Everyone who is interested in political theory will gain much from this study."—Library Journal

"The clearest and most up-to-date organization of the problem and its various possible solutions, and a quite original solution of its own. Every political theorist will need this book . . . . It is more 'important' than 90% of the work published in philosophy."—Joel Feinberg, University of Arizona