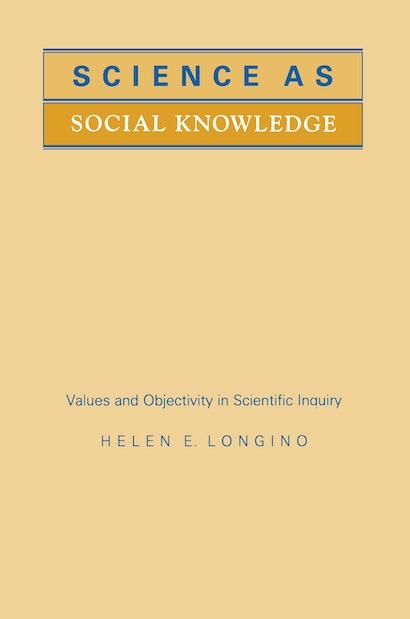 Conventional wisdom has it that the sciences, properly pursued, constitute a pure, value-free method of obtaining knowledge about the natural world. In light of the social and normative dimensions of many scientific debates, Helen Longino finds that general accounts of scientific methodology cannot support this common belief. Focusing on the notion of evidence, the author argues that a methodology powerful enough to account for theories of any scope and depth is incapable of ruling out the influence of social and cultural values in the very structuring of knowledge. The objectivity of scientific inquiry can nevertheless be maintained, she proposes, by understanding scientific inquiry as a social rather than an individual process. Seeking to open a dialogue between methodologists and social critics of the sciences, Longino develops this concept of “contextual empiricism” in an analysis of research programs that have drawn criticism from feminists. Examining theories of human evolution and of prenatal hormonal determination of “gender-role” behavior, of sex differences in cognition, and of sexual orientation, the author shows how assumptions laden with social values affect the description, presentation, and interpretation of data. In particular, Longino argues that research on the hormonal basis of “sex-differentiated behavior” involves assumptions not only about gender relations but also about human action and agency. She concludes with a discussion of the relation between science, values, and ideology, based on the work of Habermas, Foucault, Keller, and Haraway.

"Helen Longino has written a timely book that fills a critical gap in the existing literature between philosophy of science and the social studies of science. Her exposition of scientific inquiry as a context-laden process provides the conceptual tools we need to understand how social expectations shape the development of science while at the same time recognizing the dependence of scientific inquiry on its interactions with natural phenomena. This is an important book precisely because there is none other quite like it."—Evelyn Fox Keller, author of Reflections on Gender and Science