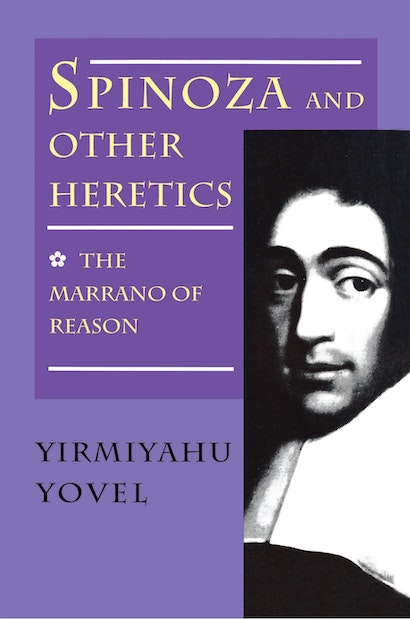 This ambitious study presents Baruch Spinoza (1632-1677) as the most outstanding and influential thinker of modernity—and examines the question of whether he was the “first secular Jew.” A number-one bestseller in Israel, Spinoza and Other Heretics is made up of two volumes—The Marrano of Reason and The Adventures of Immanence. Yirmiyahu Yovel shows how Spinoza grounded a philosophical revolution in a radically new principle—the philosophy of immanence, or the idea that this world is all there is—and how he thereby anticipated secularization, the Enlightenment, the disintegration of ghetto life, and the rise of natural science and the liberal-democratic state.

The Marrano of Reason finds the origins of the idea of immanence in the culture of Spinoza’s Marrano ancestors, Jews in Spain and Portugal who had been forcibly converted to Christianity. Yovel uses their fascinating story to show how the crypto-Jewish life they maintained in the face of the Inquisition mixed Judaism and Christianity in ways that undermined both religions and led to rational skepticism and secularism. He identifies Marrano patterns that recur in Spinoza in a secularized context: a “this-worldly” disposition, a split religious identity, an opposition between inner and outer life, a quest for salvation outside official doctrines, and a gift for dual language and equivocation. This same background explains the drama of the young Spinoza’s excommunication from the Jewish community in his native Amsterdam. Convention portrays the Amsterdam Jews as narrow-minded and fanatical, but in Yovel’s vivid account they emerge as highly civilized former Marranos with cosmopolitan leanings, struggling to renew their Jewish identity and to build a “new Jerusalem” in the Netherlands.

Yirmiyahu Yovel (1935–2018) was professor emeritus of philosophy at the Hebrew University of Jerusalem.