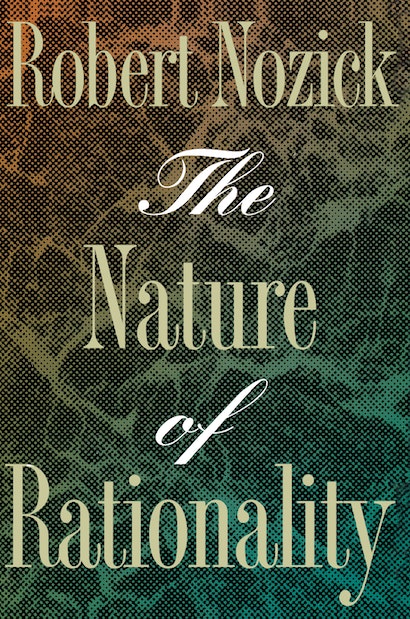 Repeatedly and successfully, the celebrated Harvard philosopher Robert Nozick has reached out to a broad audience beyond the confines of his discipline, addressing ethical and social problems that matter to every thoughtful person. Here Nozick continues his search for the connections between philosophy and “ordinary” experience. In the lively and accessible style that his readers have come to expect, he offers a bold theory of rationality, the one characteristic deemed to fix humanity’s “specialness.” What are principles for? asks Nozick. We could act simply on whim, or maximize our self-interest and recommend that others do the same. As Nozick explores rationality of decision and rationality of belief, he shows how principles actually function in our day-to-day thinking and in our efforts to live peacefully and productively with each other.


Throughout, the book combines daring speculations with detailed investigations to portray the nature and status of rationality and the essential role that imagination plays in this singular human aptitude.

Robert Nozick (1938–2002) was the Joseph Pellegrino University Professor at Harvard University. Among his works are Philosophical Explanations and The Examined Life. His Anarchy, State, and Utopia won the National Book Award in 1975.

"Robert Nozick always attacks his problems in a disconcertingly original way. . . . From Mr. Nozick you always expect fireworks. . . . The questions he addresses are fundamental in the true philosophical sense: Why exactly should we want to act and believe rationally? Why should we formulate principles of action and try to stick to them? The questions are not moral but explicatory. He is not out to argue that unprincipled or irrational behavior is immoral; rather, he invites us to consider what we are trying to do, and what the justification for such behavior is. . . . Sure to attract a great deal of interest."—Anthony Gottlieb, The New York Times Book Review

"To Nozick, rationality and belief are each an evolutionary adaptation to a world that changes in nonregular ways. Our acts resonate with symbolic meaning and 'stand for' our principles and beliefs. In this boldly original . . . inquiry which will reward serious students of philosophy, Nozick uses decision theory to propose new rules of rational decision-making that take into account the symbolic, practical, and evolutionary components of our behavior . . . . this challenging treatise champions reason as a faculty that enables us to transcend our mere animal status and to strive toward goals by the light of principles."—Publishers Weekly

"From Mr. Nozick you always expect fireworks. . . . The questions he addresses are fundamental in the true philosophical sense: Why exactly should we want to act and believe rationally?"—The New York Times Book Review