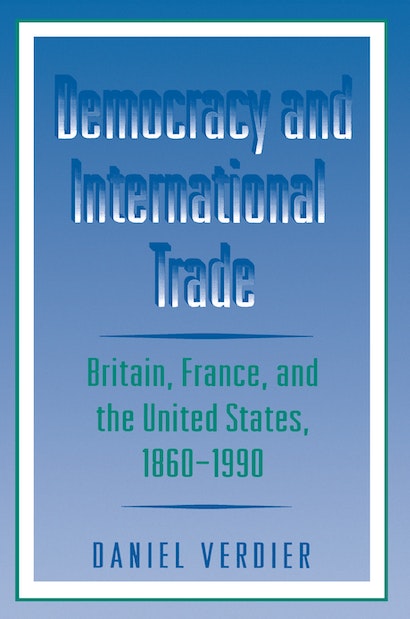 In this ambitious exploration of how foreign trade policy is made in democratic regimes, Daniel Verdier shows that special interests, party ideologues, and state officials and diplomats act as agents of the voters. Constructing a general theory in which existing theories (rent-seeking, median voting, state autonomy) function as partial explanations, he shows that trade institutions are not fixed entities but products of political competition.

Daniel Verdier is Professor of Political Science at the European University Institute, Florence.

"This is an unusual and possibly a 'mind-changing' book. . . . [It] has the potential to change many well-established perceptions about political economy and its influence on foreign policy."—International Affairs

"Political scientists will love this book and historians will find much in it to hold their attention. Economists are strongly advised to take note of it, lest they are too easily persuaded to dismiss the contribution of political processes to trade policy-making."—Nigel Grimwade, Times Higher Education Supplement

"This impressive study compels attention from students in international and comparative politics interested in the meeting of theory and case studies. It is admirably conceptualized, crafted, and researched. It raises our understanding of political economy, past, present, and future."—Peter Gourevitch, University of California, San Diego

"The combination of theoretical depth and empirical richness will make this brilliant study stand out for years to come."—Vinod K. Aggarwal, University of California, Berkeley