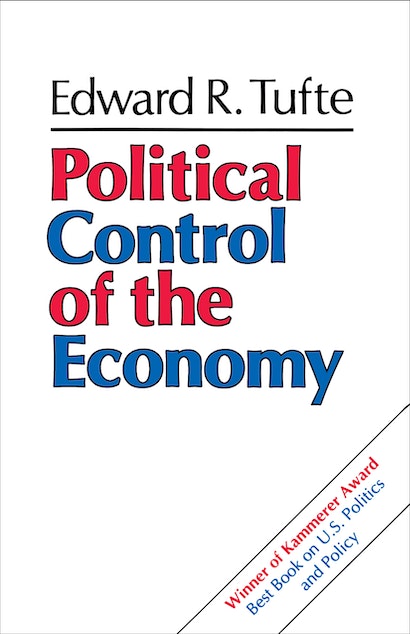 Speculations about the effects of politics on economic life have a long and vital tradition, but few efforts have been made to determine the precise relationship between them. Edward Tufte, a political scientist who covered the 1976 Presidential election for Newsweek, seeks to do just that. His sharp analyses and astute observations lead to an eye-opening view of the impact of political life on the national economy of America and other capitalist democracies.

The analysis demonstrates how politicians, political parties, and voters decide who gets what, when, and how in the economic arena. A nation’s politics, it is argued, shape the most important aspects of economic life — inflation, unemployment, income redistribution, the growth of government, and the extent of central economic control. Both statistical data and case studies (based on interviews and Presidential documents) are brought to bear on four topics. They are: 1) the political manipulation of the economy in election years, 2) the new international electoral-economic cycle, 3) the decisive role of political leaders and parties in shaping macroeconomic outcomes, and 4) the response of the electorate to changing economic conditions. Finally, the book clarifies a central question in political economy: How can national economic policy be conducted in both a democratic and a competent fashion?

"A remarkable study, one that is provocative and concise, sometimes brazen in its theoretical assumptions and assertions, laced throughout with elegance and wit. Amid the vast outpouring of contemporary social science, (this) truly is a book for all seasons, important to every scholar interested in the relationship of elections, government, and public policy."—American Political Science Review

"Of late, a growing number of political scientists and economists have been attempting to see if there is a relationship, here and abroad, between the ‘political cycle' (that is, periodic elections) and the business cycle (the ups and downs of various measures of economic well-being). The most recent, lucid, and comprehensive of these studies is the brilliant book by Edward R. Tufte."—James Q. Wilson, Commentary

"Will nourish political junkies everywhere.Read it. It's short, jargon-free, readable, informative, and free of ideological axes, which is saying a lot for a book about the 'dismal science.'"—Mark Green, Washington Post Book World

"A theoretically elegant and methodologically sophisticated analysis of the systematic linkage between national politics and macroeconomic policies in the world's major democracies.This is political science at its best."—Choice

"[A] crisp and convincing study of perhaps the central issue in the political economy of major democratic societies today."—Foreign Affairs