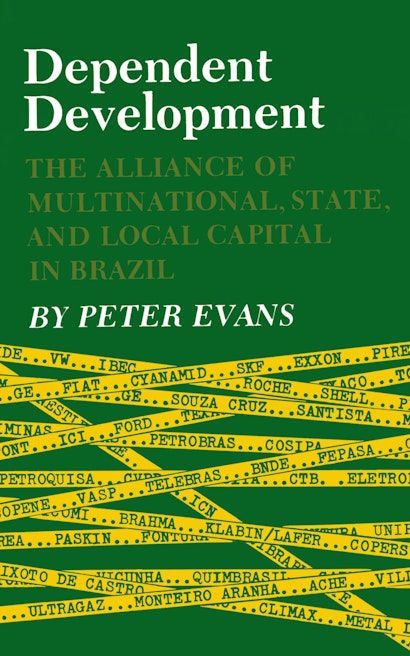 In order to analyze Brazil’s recent accumulation of capital in the light of its continued dependence, Peter Evans focuses on the relationships among multinational corporations, local private entrepreneurs, and state-owned enterprises that have developed in Brazil over the last decade. He argues that while relations among the three kinds of capital continue to be contradictory, a triple alliance has been formed that provides the social structural basis for the pattern of local industrialization that has emerged.

The author begins with a review of the theories of imperialism and dependency in the third world. Placing the Brazilian experience of the last twenty years in its historical context, he traces the country’s evolution from the period of “classic dependence” at the turn of the century to the current stage of “dependent development.” In conclusion, Professor Evans discusses the implications of the Brazilian model for other third world countries.

Examining the nature of the triple alliance as it is manifested in such industries as pharmaceuticals, textiles, and petrochemicals, the author reveals the complex differentiation of the groups’ roles in industrialization and lays bare the grounds for their collaboration and their conflict. He consequently shows how the differing interests, power, and capabilities of the three groups have combined to produce a system promoting industrialization that benefits the elite partnership but excludes the larger population from the rewards of growth.

"This is the most important recent book on economic development written from a Left political perspective. . . . Rare has been the industrial revolution which has equitably benefitted the generation which produced that revolution. What Evans has accomplished in this book is a brilliant analysis of the circumstances in which the most recent version of this kind of alienating development can occur."—The Annals