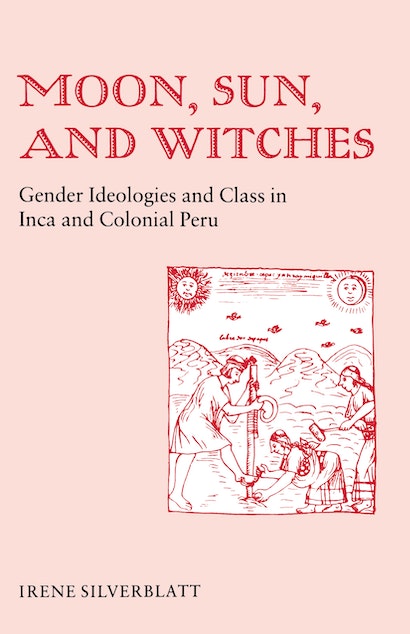 When the Spanish arrived in Peru in 1532, men of the Inca Umpire
worshipped the Sun as Father and their dead kings as ancestor heroes,
while women venerated the Moon and her daughters, the Inca
queens, as founders of female dynasties. In the pre-Inca period such
notions of parallel descent were expressions of complementarity between
men and women. Examining the interplay between gender ideologies
and political hierarchy, Irene Silverblatt shows how Inca rulers
used their Sun and Moon traditions as methods of controlling
women and the Andean peoples the Incas conquered. She then explores
the process by which the Spaniards employed European male
and female imageries to establish their own rule in Peru and to make
new inroads on the power of native women, particularly poor peasant
women.

Harassed economically and abused sexually, Andean women
fought back, earning in the process the Spaniards’ condemnation as
“witches.” Fresh from the European witch hunts that damned
women for susceptibility to heresy and diabolic influence, Spanish
clerics were predisposed to charge politically disruptive poor women
with witchcraft. Silverblatt shows that these very accusations
provided women with an ideology of rebellion and a method for
defending their culture.

Irene Silverblatt is professor emerita of cultural anthropology at Duke University. She is also the author of Modern Inquisitions: Peru and the Colonial Origins of the Civilized World.

"This is a rich and compelling analysis—well conceived, innovative, and dealing with important frontiers in several fields. It will stand as a very important contribution to anthropology, ethnohistory, Latin American studies, and women's studies."—Kay B. Warren, Princeton University