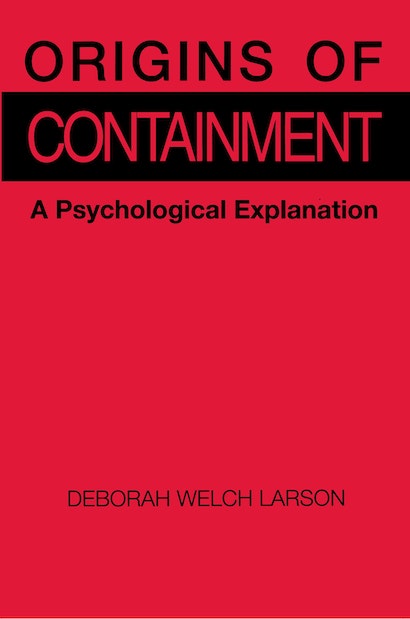 The description for this book, Origins of Containment: A Psychological Explanation, will be forthcoming.

"One of the more encouraging historiographical developments of recent years has been the dialogue that is beginning to take place between American diplomatic historians and their colleagues in the fields of political science, international relations, and social pathology. . . . Larson's book provides impressive evidence that these interdisciplinary contacts are at last bearing fruit."—John Lewis Gaddis, American Historical Review

"A refutation of the idea that nothing remains to be said about the origins of the Cold War. The author offers cogent criticisms of the limitations of revisionist and 'confirmationist' interpretations and then subtly applies a range of theories about the way people think to the behavior of American leaders in the years 1945-1947."—Foreign Affairs

"The bulk of the book consists of an intelligent and balanced account of the evolutions of United States policy toward the Soviet Union in the early Truman years. Larson's focus is on the four men—Harry S. Truman, James F. Byrnes, W. Averell Harriman, Dean Acheson—whom she considers the key figures in this evolution. . . . Larson portrays an uncertain, vacillating President who was inarticulate on strategic issues, lacked a coherent philosophy of foreign policy, was unduly impressed by the last person who talked to him, and spent these years in a 'genuine torment of indecision.' . . . In general, Larson sees the Cold War belief system as the consequence, not the cause of, the adoption of the containment policy."—Arthur Schlesinger, Jr., Political Science Quarterly

"Deborah W. Larson's cogent and lucid analysis of the historical origins of containment is presented three-dimensionally. Larson invokes the theoretical tools of the political scientist, historian, and psychologist to demonstrate that no single disciplinary model has sufficient explanatory value. Instead, she offers us a 'composite multidimensional strategy' to explain why the United States embraced Cold War policies in the period following World War II."—Lauren H. Holland, Annals of the American Academy of Political and Social Science