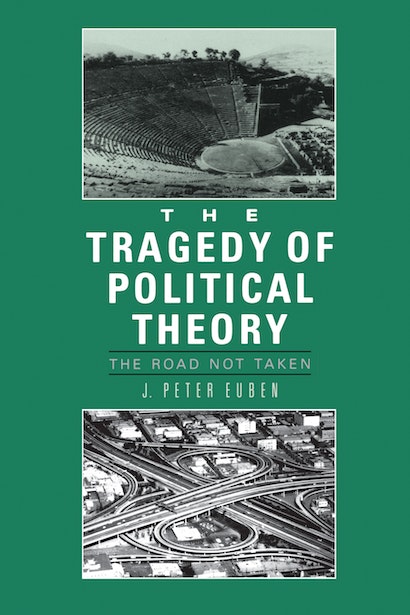 In this book J. Peter Euben argues that Greek tragedy was the context for classical political theory and that such theory read in terms of tragedy provides a ground for contemporary theorizing alert to the concerns of post-modernism, such as normalization, the dominance of humanism, and the status of theory. Euben shows how ancient Greek theater offered a place and occasion for reflection on the democratic culture it helped constitute, in part by confronting the audience with the otherwise unacknowledged principles of social exclusion that sustained its community.


Euben makes his argument through a series of comparisons between three dramas (Aeschylus’ Oresteia, Sophocles’ Oedipus Tyrannos, and Euripides’ Bacchae) and three works of classical political theory (Thucydides’ History and Plato’s Apology of Socrates and Republic) on the issues of justice, identity, and corruption. He brings his discussion to a contemporary American setting in a concluding chapter on Thomas Pynchon’s The Crying of Lot 49 in which the road from Argos to Athens, built to differentiate a human domain from the undefined outside, has become a Los Angeles freeway desecrating the land and its people in a predatory urban sprawl.

"J. Peter Euben seeks to identify Socratic political thought with its original dramatic and democratic context. He illuminates the tragic elements in classical political theory and the theoretical elements in Greek tragedy. . . . The book's literary quality, important message, and detailed argument will make it valuable to general readers."—Journal of Politics