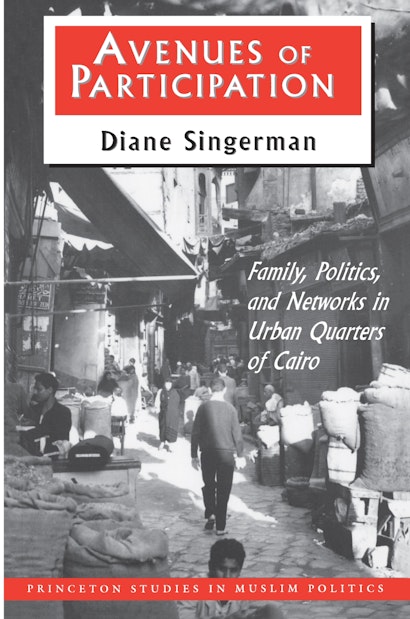 Intentionally excluded from formal politics in authoritarian states by reigning elites, do the common people have concrete ways of achieving community objectives? Contrary to conventional wisdom, this book demonstrates that they do. Focusing on the political life of the sha’b (or popular classes) in Cairo, Diane Singerman shows how men and women develop creative and effective strategies to accomplish shared goals, despite the dominant forces ranged against them. Starting at the household level in one densely populated neighborhood of Cairo, Singerman examines communal patterns of allocation, distribution, and decision-making. Combining the institutional focus of political science with the sensitivities of anthropology, she uncovers a system of informal networks, supported by an informal economy, that constitutes another layer of collective institutions within Egypt and allows excluded groups to pursue their interests.

Avenues of Participation traces this informal system from its grounding in the family to its influence on the larger polity. Discussing the role of these networks in meeting fundamental needs in the community — such as earning a living, reproducing the family, saving and investing money, and coping with the bureaucracy — Singerman demonstrates the surprising power these “excluded” people wield. While the government has reduced politics to the realm of distribution to protect itself from challenges, she argues that the popular classes in Cairo, as consumers of goods and services, have turned exploiting the government into a fine art.

Diane Singerman is an Assistant Professor in the Department of Government, School of Public Affairs, at The American University.

"Political anthropology of a high order. Singerman shows how family ties empower people....Her picture of women black marketeers is especially revealing. As a social scientist, she is determined to challenge the stereotype of the passive urban poor, and she makes a largely successful case for seeing politics in other than elite terms."—Foreign Affairs

"[An] outstanding piece of scholarship that forces us to rethink and broaden our understanding of political participation to better appreciate the alternative institutions that marginalized communities create in order to satisfy their political and economic needs. . . . [Singerman's] vivid account is one of only a handful of studies that provide a detailed picture of the daily political and economic experiences of lower-class communities in the Middle East."—Guilain Denoeux, American Journal of Sociology

"Singerman's work cuts across a variety of disciplines—comparative political science, anthropology and sociology, women's studies, and economics—and all are handled deftly. . . . She is a superb writer and has produced an enjoyable, informative, and challenging piece of scholarship."—Denis J. Sullivan, Middle East Journal