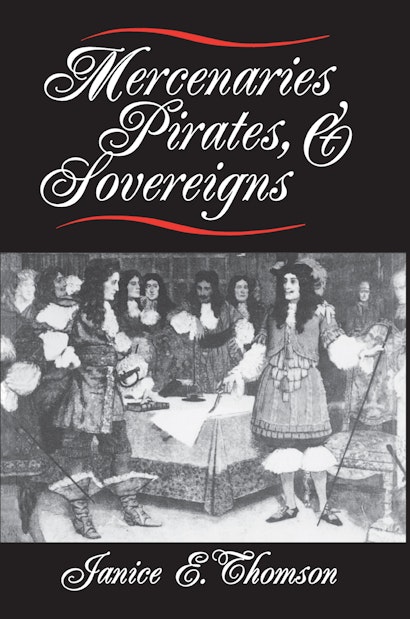 The contemporary organization of global violence is neither timeless nor natural, argues Janice Thomson. It is distinctively modern. In this book she examines how the present arrangement of the world into violence-monopolizing sovereign states evolved over the six preceding centuries.

Janice E. Thomson is Assistant Professor of Political Science at the University of Washington.

"All may . . . welcome [Thomson] as a fellow-grappler with that protean problem that confronts historians and . . . social scientists alike: the shortcomings of international society [today], and the degree to which those shortcomings are attributable to the idea that 'sovereign states' have of themselves, and the self-interested ways they tend to behave within it."—Geoffrey Best, Times Literary Supplement

"Janice E. Thomson's title may mislead. She is a political scientist, [but] ... there is much in Mercenaries, Pirates, and Sovereigns for historians too; for the many with an interest in state-formation and the not-so-many interested in the development of the interstate-system or, as some of us prefer to call it, international society. The common factor in the discussion of the two processes is the question of the legitimate uses of armed force."—Times Literary Supplement

"Strike[s] at the heart of [the] assumption that a monopoly on violence is the hallmark of the state, ... [Thomson] is correct when she advises us that `state' and `sovereignty' are more mutable concepts than we might acknowledge or even admit. [A] major contribution to our understanding of international affairs and to the history of state-building."—Francis X. Hartigan, Terrorism and Political Violence