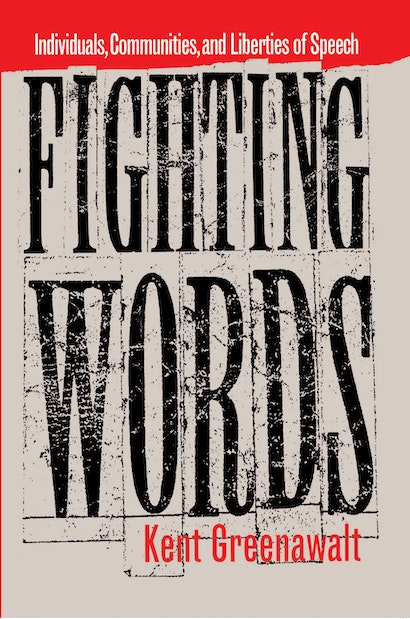 Should “hate speech” be made a criminal offense, or does the First Amendment oblige Americans to permit the use of epithets directed against a person’s race, religion, ethnic origin, gender, or sexual preference? Does a campus speech code enhance or degrade democratic values? When the American flag is burned in protest, what rights of free speech are involved? In a lucid and balanced analysis of contemporary court cases dealing with these problems, as well as those of obscenity and workplace harassment, acclaimed First Amendment scholar Kent Greenawalt now addresses a broad general audience of readers interested in the most current free speech issues.

Kent Greenawalt is University Professor at Columbia University and a member of the faculty of the School of Law. He is the author of numerous works including Speech, Crime, and the Uses of Language and Religious Convictions and Political Choice.

"Greenawalt's ... even-handed treatment of the relevant opinions and his reasoned support for a powerful free speech principle is a welcome change from the hectoring tone that often creeps into First Amendment debates.... Fighting Words is a wonderful book. With its publication, the era of serious comparative constitutional jurisprudence has begun."—Burt Neuborne, New York Law Journal

"Everyone interested in contemporary debates about law, free speech, or democratic society should read ... Fighting Words.... [It] is an important book because it breaks a popular American conception that the First Amendment is an absolute.... Greenawalt opens the reader's mind to various legal alternatives regarding free expression."—Archon Fung, The Boston Book Review

"[A] thought-provoking, well-reasoned, and well-balanced analysis of the similarities and contrasts on issues of free speech between the U.S. Supreme Court's interpretation of the Bill of Rights and the Supreme Court of Canada's construction of the Charter of Rights and Freedoms. . . . Required reading for scholars and laypeople alike."—Choice

"Fighting Words is an outstanding book. It deserves not only all the accolades it undoubtedly will receive, but also the widest possible readership."—Lee C. Bollinger, Provost, Dartmouth College

"At last we have a cogent comparison of the treatment of free speech questions in the United States and Canada. With his demonstrated gift for clarity, Greenawalt provides a detailed account of the contrasting approaches to hate speech, obscenity, workplace harassment, and campaign spending in two liberal democracies. This work will enlighten even those who disagree with the positions it takes on the issue. It will be of use to experts, students, and general readers."—Martha Minow, Harvard Law School

"This is an exceptionally thoughtful and readable study of the most urgent free speech controversies of our time. By linking the analysis to the conflicting demands of justice toward individuals and communities, and doing so with scrupulous fairness, Greenawalt will lead many readers to rethink their vision of the good society."—Norman Dorsen, Stokes Professor of Law, New York University School of Law

"A lucid and subtle discussion. Greenawalt shows keen understanding of the temptations to regulate speech while defending its freedom resourcefully and generously."—George Kateb, Princeton University

"All of Kent Greenawalt's work is characterized by meticulous care and scrupulous fairness in argument. These talents of admirable balance and professional craft are especially apparent in this book, and their application to some of the most controversial free speech issues of our times is a needed addition to the literature."—Frederick Schauer, Frank Stanton Professor of the First Amendment, Harvard University

"By comparing American and Canadian perspectives, Greenawalt sheds light on how different constitutional cultures can reach different results on the same fundamental questions. This is a valuable work for anyone seeking to understand the most pressing free speech issues of our time."—Geoffrey R. Stone, Provost, University of Chicago