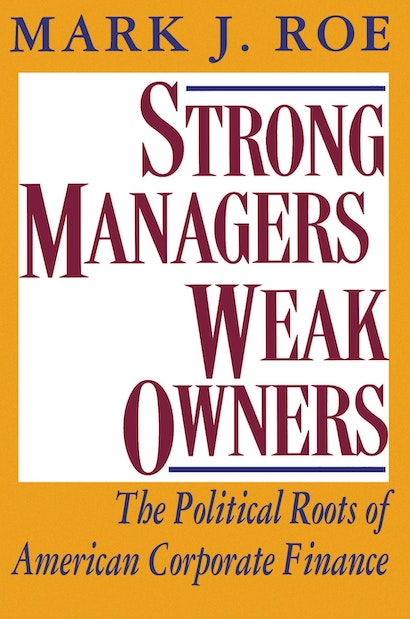 In this major reinterpretation of the evolution of the American corporation, Mark Roe convincingly demonstrates that the ownership structure of large U.S. firms owes its distinctive character as much to politics as to economics and technology. His provocative examination addresses essential issues facing American businesses today as they compete in the new international marketplace.

Mark J. Roe is a professor at Columbia Law School.

"Economic theory appeared to predict that the American version [of capitalism, in which firms feed on a huge and liquid stockmarket] should be the most efficient. This view stemmed from [Berle and Means] in The Modern Corporation and Private Property ... [and] held sway for the next fifty years.... Roe ... takes this debate a giant step forward. Far from being the inevitable winner of a Darwinian struggle, argues Roe, the Berle-Means corporation owes its existence to American politics, and in particular to a deeply ingrained popular mistrust of concentrated financial power."—The Economist

"No one before has ever written a comprehensive poltical history of the fragmentation of stock ownership nor demonstrated the critical role that this fragmentation has played in shaping the power of managers in the American business system. Roe has provided a powerful and original explanation of the emergence and persistence of managerial autonomy in the United States."—David Vogel, University of California, Berkeley

"A seminal work that should become [a] mainstay for years to come."—Peter H. Aranson, Emory University