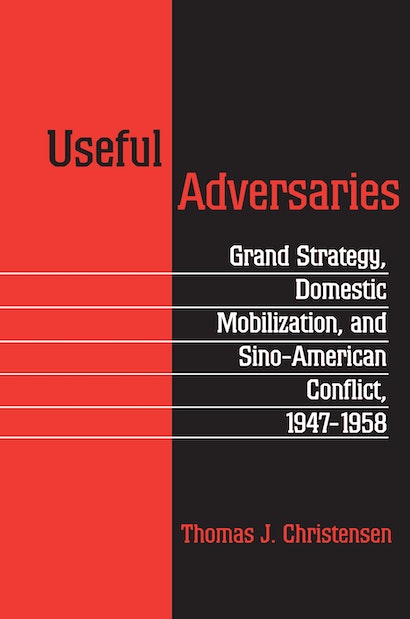 This book provides a new analysis of why relations between the United States and the Chinese Communists were so hostile in the first decade of the Cold War. Employing extensive documentation, it offers a fresh approach to long-debated questions such as why Truman refused to recognize the Chinese Communists, why the United States aided Chiang Kai-shek’s KMT on Taiwan, why the Korean War escalated into a Sino-American conflict, and why Mao shelled islands in the Taiwan Straits in 1958, thus sparking a major crisis with the United States.


Christensen first develops a novel two-level approach that explains why leaders manipulate low-level conflicts to mobilize popular support for expensive, long-term security strategies. By linking “grand strategy,” domestic politics, and the manipulation of ideology and conflict, Christensen provides a nuanced and sophisticated link between domestic politics and foreign policy. He then applies the approach to Truman’s policy toward the Chinese Communists in 1947-50 and to Mao’s initiation of the 1958 Taiwan Straits Crisis. In these cases the extension of short-term conflict was useful in gaining popular support for the overall grand strategy that each leader was promoting domestically: Truman’s limited-containment strategy toward the USSR and Mao’s self-strengthening programs during the Great Leap Forward. Christensen also explores how such low-level conflicts can escalate, as they did in Korea, despite leaders’ desire to avoid actual warfare.

Thomas J. Christensen is currently Assistant Professor of Government at Cornell University. He formerly held an SSRC/MacArthur Foundation fellowship in international peace and security and was an Olin National Security Fellow at Harvard University.

"[Christensen] makes a convincing and original argument that political leaders, in order to secure public support for their fundamental grand strategy, may have to adopt a more hostile foreign policy than they would prefer . . . This volume is indispensable for anyone interested in Sino-American relations."—Foreign Affairs