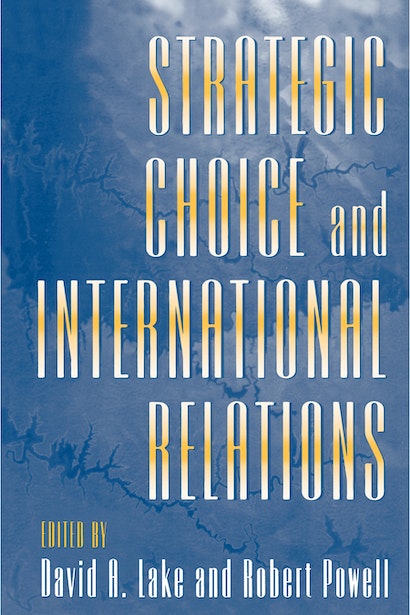 The strategic-choice approach has a long pedigree in international relations. In an area often rent by competing methodologies, editors David A. Lake and Robert Powell take the best of accepted and contested knowledge among many theories. With the contributors to this volume, they offer a unifying perspective, which begins with a simple insight: students of international relations want to explain the choices actors make — whether these actors be states, parties, ethnic groups, companies, leaders, or individuals.


This synthesis offers three new benefits: first, the strategic interaction of actors is the unit of analysis, rather than particular states or policies; second, these interactions are now usefully organized into analytic schemes, on which conceptual experiments may be based; and third, a set of methodological “bets” is then made about the most productive ways to analyze the interactions. Together, these elements allow the pragmatic application of theories that may apply to a myriad of particular cases, such as individuals protesting environmental degradation, governments seeking to control nuclear weapons, or the United Nations attempting to mobilize member states for international peacekeeping. Besides the editors, the six contributors to this book, all distinguished scholars of international relations, are Jeffry A. Frieden, James D. Morrow, Ronald Rogowski, Peter Gourevitch, Miles Kahler, and Arthur A. Stein. Their work is an invaluable introduction for scholars and students of international relations, economists, and government decision-makers.

"Elegant and groundbreaking . . . a useful and insightful framework to guide debates over American foreign policy."—Foreign Affairs

"Lake skillfully investigates an important dimension of international behavior unduly neglected by traditional theory, and his analysis of the early Cold War is particularly insightful. This is, on balance, an innovative and challenging work that deepens our understanding of American internationalism in the twentieth century."—Frank Ninkovich, American Historical Review

"This is one of the best edited volumes in international relations I have seen. This is an impressive book that should have a substantial impact on the field."—Lisa Martin, Harvard University