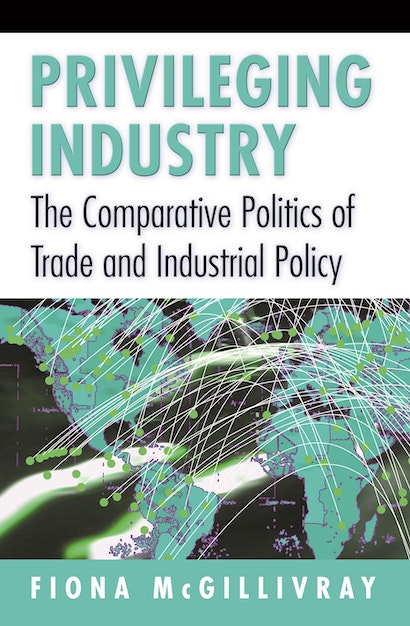 Why do some industries win substantial protection from the whims of international trade while others do not? Privileging Industry challenges standard approaches to this question in its examination of when governments use trade and industrial policy for political goals. Fiona McGillivray shows why aiding an industry can be a politically efficient way for a government to redistribute resources from one industrial sector to another. Taking a comparative perspective that stands in contrast with the usual focus on U.S. trade politics, she explores, for example, how electoral rules, party strength, and industrial geography affect redistribution politics across countries. How do political institutions and the geographical dispersion of industries interact to determine which industries governments privilege? What tests can assess how governments distribute assistance across industries?


Research has focused on the industries that legislators want to protect, but just as important is identifying those legislators able to deliver trade assistance. Assisting an industry requires both a will and a means. Whether an industry is a good vehicle through which to redistribute income depends on its geographic make-up and the country’s electoral system. In turn, the electoral system and party strength affect how legislators’ preferences contribute to policy. McGillivray tests these arguments using a tariff-based empirical test and nonstandard dependent variables such as the dispersion of stock prices within fourteen different capital markets, and government influence in the targeting of plant closures within declining industries.

"Politicians protect their own. So the pattern of trade and industry protection depends on which groups of voters the ruling politicians most need to protect. In this sparkling new contribution, Fiona McGillivray shows that the answers differ in different political systems. She can explain why, in Britain, cutlery and textiles have been protected but coal and steel have not been. This is a smart application of median voter theory, paying (as others have failed to) attention to the fact that the relevant median voter is different in strong-party systems and in weak-party systems; and in plurality electoral systems and proportional representation electoral systems. As a Scot working in the U.S.A., she is unusually sensitive to the nuances of comparative politics. This is a must-read for the political economy of protection."—Iain McLean, Oxford University

"An important contribution to our understanding of how political institutions and political geography shape political outcomes. Fiona McGillivray argues that differences in political institutions or in industrial structures do not have the straightforward effects on political outcomes that are normally attributed to them. Instead, she examines how the effects of interests vary depending on how they are mediated by political interests."—Robert Pahre, University of Illinois, Urbana-Champaign, author of Leading Questions: How Hegemony Affects the International Political Economy