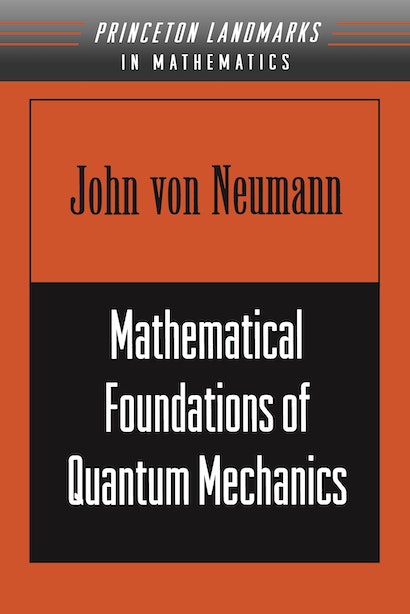 Mathematical Foundations of Quantum Mechanics was a revolutionary book that caused a sea change in theoretical physics. Here, John von Neumann, one of the leading mathematicians of the twentieth century, shows that great insights in quantum physics can be obtained by exploring the mathematical structure of quantum mechanics. He begins by presenting the theory of Hermitean operators and Hilbert spaces. These provide the framework for transformation theory, which von Neumann regards as the definitive form of quantum mechanics. Using this theory, he attacks with mathematical rigor some of the general problems of quantum theory, such as quantum statistical mechanics as well as measurement processes. Regarded as a tour de force at the time of publication, this book is still indispensable for those interested in the fundamental issues of quantum mechanics.

"[Von Neumann's] book was the first exposition of quantum mechanics that made the theory mathematically respectable. The concepts were rigorously defined and the consequences rigorously deduced. . . . From that book I learned most of what I know about quantum mechanics."—Freeman Dyson, Notices of the American Mathematical Society

"That von Neumann has been ‘par excellence' the mathematician of quantum mechanics is as obvious to every physicist now as it was a quarter of a century ago. Quantum mechanics was very fortunate indeed to attract, in the very first years after its discovery in 1925, the interest of a mathematical genius of von Neumann’s stature. As a result, the mathematical framework of the theory was developed and the formal aspects of its entirely novel rules of interpretation were analyzed by one single man in two years."—Léon Van Hove, Bulletin of the American Mathematical Society

"After almost a quarter of a century this book is still a valuable addition to any library. There are few references in which quantum statistics, including the concept of the density matrix and a discussion of the theory of measurement, is treated in as masterful a manner. . . . [The translator] is to be congratulated on an excellent piece of work."—M. E. Rose, Physics Today

"The translator and publisher have performed a service in making this classic available to a wider circle of English-speaking readers. It remains indispensable to those who desire a rigorous presentation of the foundations of the subject."—A. F. Stevenson, Quarterly of Applied Mathematics