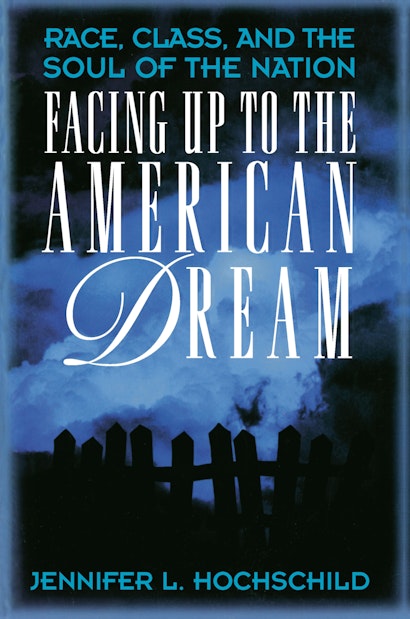 The ideology of the American dream — the faith that an individual can attain success and virtue through strenuous effort — is the very soul of the American nation. According to Jennifer Hochschild, we have failed to face up to what that dream requires of our society, and yet we possess no other central belief that can save the United States from chaos. In this compassionate but frightening book, Hochschild attributes our national distress to the ways in which whites and African Americans have come to view their own and each other’s opportunities. By examining the hopes and fears of whites and especially of blacks of various social classes, Hochschild demonstrates that America’s only unifying vision may soon vanish in the face of racial conflict and discontent.


Hochschild combines survey data and vivid anecdote to clarify several paradoxes. Since the 1960s white Americans have seen African Americans as having better and better chances to achieve the dream. At the same time middle-class blacks, by now one-third of the African American population, have become increasingly frustrated personally and anxious about the progress of their race. Most poor blacks, however, cling with astonishing strength to the notion that they and their families can succeed — despite their terrible, perhaps worsening, living conditions. Meanwhile, a tiny number of the estranged poor, who have completely given up on the American dream or any other faith, threaten the social fabric of the black community and the very lives of their fellow blacks.


Hochschild probes these patterns and gives them historical depth by comparing the experience of today’s African Americans to that of white ethnic immigrants at the turn of the century. She concludes by claiming that America’s only alternative to the social disaster of intensified racial conflict lies in the inclusiveness, optimism, discipline, and high-mindedness of the American dream at its best.

Jennifer L. Hochschild is Professor of Politics and Public Affairs at Princeton University. Among her other works are The New American Dilemma: Liberal Democracy and School Desegregation and What's Fair?: American Beliefs about Distributive Justice.

"Jennifer Hochschild bravely tries to disassemble the central elements that are bound up in that vague but still politically and ideologically potent thing, `the American dream.' . . . She wants to iron out the defects of the dream rather than to overturn it, and she feels the good health of our society depends not only on belief in the American dream but on its realization, and in particular on repairing its central failure, which is the inability of some many black Americans to participate in what it promises. . . . [T]here is a division between the way American blacks and American whites see our great racial problem, and it is very unsettling that this division is so great. . . ."—Nathan Glazer, The New Republic

"Drawing on a rich lode of polling data, policy studies and popular journalism, Hochschild probes the essential questions suggested by this book's title. . . . Without new politics to alleviate race and class injustice, she warns, we face abandonment of the dream, perhaps leading to a formalization of American hierarchy and a separatist black nationalism."—Publishers Weekly

"At the center of U.S. ideology rests the promise that all Americans have a reasonable chance at success, however defined; Hochschild demonstrates how that promise now faces severe challenge from real and perceived barriers of race and class. . . . Overall, she shows that shared disaffections and hardening black and white views of each other threaten to rend the nation's social fabric. Her work demands thoughtful reading and earnest discussion."—Library Journal

"A major study of current public opinion that offers some grounds for hoping that racial equality and harmony can be achieved on the basis of a shared commitment to a set of traditional American values."—George M. Fredrickson, The New York Review of Books

"An analysis that is tragic, and deeply revealing."—David Chappell, In These Times

". . . Provides a clearer understanding of the racial and class problems that help fragment the U.S."—Choice

"Hochschild examines questions of equality and opportunity through the lens of the American dream [giving us] a clearer understanding of the rage that even many successful blacks feel."—Ellen K. Coughlin, The Chronicle of Higher Education