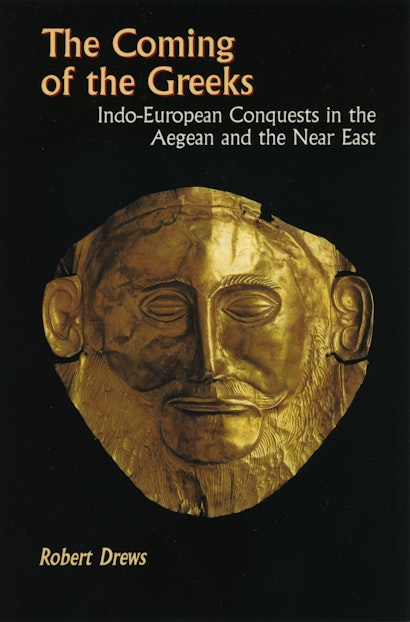 When did the Indo-Europeans enter the lands that they occupied during historical times? And, more specifically, when did the Greeks come to Greece? Robert Drews brings together the evidence — historical, linguistic, and archaeological — to tackle these important questions.

Robert Drews is Professor of Classics and History at Vanderbilt University. He is the author of The End of the Bronze Age: Changes in Warfare and the Catastrophe ca. 1200 b.c. (Princeton), The Greek Accounts of Eastern History, and Basileus: The Evidence for Kingship in Geometric Greece.

"Into the ever-tangled and speculative debate on Indo-European origins comes this excellent book: lucid, critical, and refreshingly sober."—D. F. Easton, The Classical Review

"The fact that [a] pattern of localized Near Eastern takeovers coincides with the inception of chariot warfare, coupled with his carefully documented hypothesis that Proto-Indo-European-speaking (PIE) peoples in Armenia were responsible for the development and spread of chariot warfare, serves as the backdrop to Drews's innovative scenario for the arrival of the Greeks.... Such complete Near Eastern analogies involving archaeology, mythology, and linguistics, for example, have been rarely applied to support theories of PIE dispersal.... His research serves the critical function of provoking new views of a long-standing problem."—Susan N. Skomal, American Journal of Archaeology

"An archaeological and linguistic whodunnit of the most fascinating sort, courageously tackling a much-argued problem from several disciplines at once.... No one dealing with the dispersal of the Indo-Europeans can ignore this book."—Elizabeth Wayland Barber, Occidental College