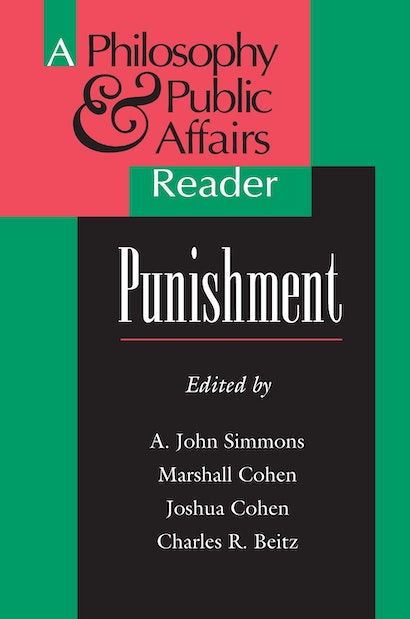 The problem of justifying legal punishment has been at the heart of legal and social philosophy from the very earliest recorded philosophical texts. However, despite several hundred years of debate, philosophers have not reached agreement about how legal punishment can be morally justified. That is the central issue addressed by the contributors to this volume. All of the essays collected here have been published in the highly respected journal Philosophy & Public Affairs. Taken together, they offer not only significant proposals for improving established theories of punishment and compelling arguments against long-held positions, but also ori-ginal and important answers to the question, “How is punishment to be justified?”

Part I of this collection, “Justifications of Punishment,” examines how any practice of punishment can be morally justified. Contributors include Jeffrie G. Murphy, Alan H. Goldman, Warren Quinn, C. S. Nino, and Jean Hampton. The papers in Part II, “Problems of Punishment,” address more specific issues arising in established theories. The authors are Martha C. Nussbaum, Michael Davis, and A. John Simmons. In the final section, “Capital Punishment,” contributors discuss the justifiability of capital punishment, one of the most debated philosophical topics of this century. Essayists include David A. Conway, Jeffrey H. Reiman, Stephen Nathanson, and Ernest van den Haag.

"Ringside theorists can get more in 'Punishment', a set of strictly philosophical essays . . . 'Punishment' ends with a lively exchange about sentencing bias in capital punishment."—The Economist