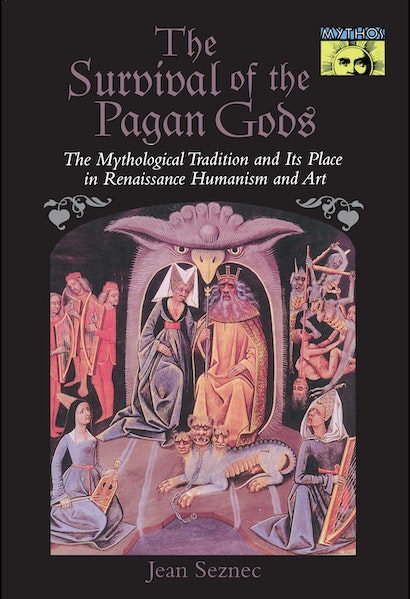 The gods of Olympus died with the advent of Christianity — or so we have been taught to believe. But how are we to account for their tremendous popularity during the Renaissance? This illustrated book, now reprinted in a new, larger paperback format, offers the general reader first a discussion of mythology in late antiquity and the Middle Ages, and then a multifaceted look at the far-reaching role played by mythology in Renaissance intellectual and emotional life.

Jean Seznec was for many years a member of the faculty at Harvard University, and up until his death in 1983 he taught at All Souls College, Oxford, England.

"Such a synthesis has never been attempted before, and the author . . . has performed this much-needed service with exceptional distinction and clarity of purpose."—Art Digest

"Here is a book . . . that tells us what became of the gods after the fall of Rome, in what strange disguises they lived on, and how they emerged in the Quattrocento with odd attributes and symbols the ancients never knew. . . . It is a formidable task, demanding vast learning in many fields; and it is brilliantly performed."—The Times Literary Supplement