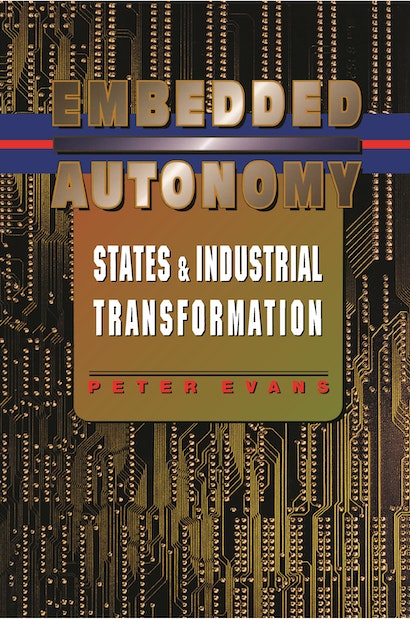 In recent years, debate on the state’s economic role has too often devolved into diatribes against intervention. Peter Evans questions such simplistic views, offering a new vision of why state involvement works in some cases and produces disasters in others. To illustrate, he looks at how state agencies, local entrepreneurs, and transnational corporations shaped the emergence of computer industries in Brazil, India, and Korea during the seventies and eighties.


Evans starts with the idea that states vary in the way they are organized and tied to society. In some nations, like Zaire, the state is predatory, ruthlessly extracting and providing nothing of value in return. In others, like Korea, it is developmental, promoting industrial transformation. In still others, like Brazil and India, it is in between, sometimes helping, sometimes hindering. Evans’s years of comparative research on the successes and failures of state involvement in the process of industrialization have here been crafted into a persuasive and entertaining work, which demonstrates that successful state action requires an understanding of its own limits, a realistic relationship to the global economy, and the combination of coherent internal organization and close links to society that Evans called “embedded autonomy.”

Peter Evans, Professor of Sociology at the University of California, Berkeley, is the author of Dependent Development: The Alliance of Multinational State and Local Capital in Brazil (Princeton).

"This carefully researched and well-written book is an important addition to development literature."—Choice

"Evans establishes himself once again as an indisputable leader of the development field. This book represents the finest example of the comparative institutional analysis of the state's role in economic transformation in the contemporary world."—Journal of Sociology

"`What kinds of state structure facilitate industrial transformation?' To answer this apparently simple question, Evans takes us on a tour d'horizon of state theory, bureaucratic theory, and development theory, then on to a close-up look at the computer industry in Korea, Brazil, and India. His answer combines big theory with a grasp of the texture of particular societies, organizations, and individuals. A blockbuster, in every sense."—Robert Wade, Institute of Development Studies, Sussex University

"Among the many studies of the state's role in promoting social and economic progress, Peter Evans's new book stands out for its theoretical and historical depth, for its wealth of institutional and technical data, and above all for its ability to recognize and acknowledge complexity. Between the polar opposites of the `developmental' and the `predatory' state, Evans inserts a rich variety of intermediate and frequently shifting configurations. In a masterful survey of the computer industries in Brazil, India, and Korea, he convinces the reader that the more successful policies have resulted from implausible and surprising institutional innovations that were far removed from available ideological recipes. A major and mature accomplishment."—Albert O. Hirschman, Institute for Advanced Study, Princeton

"A major accomplishment. Evans interprets the state's role in economic development on the basis of solid empirical research and an innovative framework that `brings the state back in' while keeping it at bay from interest groups."—Alice H. Amsden, Massachusetts Institute of Technology

"Embedded Autonomy is a wonderful tale of triumph and debacle that paints the big picture as well as the dramatic detail. It will have a major impact in the academy because of its solid basis in Evans's careful research on development projects and its deft critique of state-bashing. It will likely also find a large audience in the applied development community in the United States and abroad."—Christopher Chase-Dunn, The Johns Hopkins University