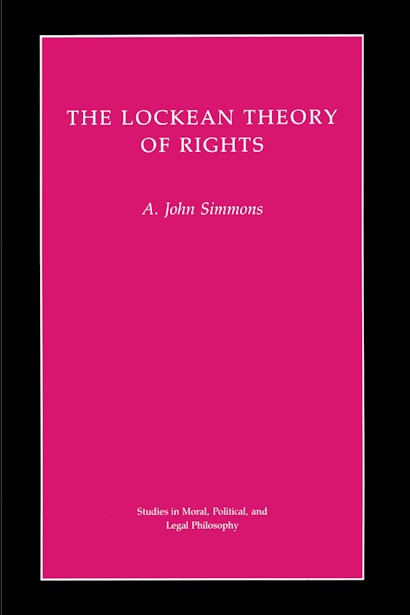 John Locke’s political theory has been the subject of many detailed treatments by philosophers and political scientists. But The Lockean Theory of Rights is the first systematic, full-length study of Locke’s theory of rights and of its potential for making genuine contributions to contemporary debates about rights and their place in political philosophy. Given that the rights of persons are the central moral concept at work in Locke’s and Lockean political philosophy, such a study is long overdue.

A. John Simmons is Professor of Philosophy at University of Virginia.

"A powerful analysis. . . . [It] succeeds in demonstrating the depth and cogency of much of Locke's moral and political thought and leaves us with a number of excellent reasons for believing that . . . talk of natural rights of a distinctly Lockean kind is indispensable for any satisfactory account of the just society."—G. A. J. Rogers, The Times Higher Education Supplement

". . . a remarkable volume—by far the best treatment of Locke's account of rights and one that is likely to remain so, because it treats the texts with intelligent scholarship and argues with a high degree of sophistication. . ."—Ian Harris, American Political Science Review

"[Simmon's] densely argued and heavily referenced work—he reveals deep knowledge of both the primary and secondary literature and overturns many a famous name in a footnote—provides us with a powerful analysis of what is probably the central moral concept of Locke's political philosophy, namely his theory of rights."—G. A. J. Rogers, The Times Higher Education Supplement

"[Simmons] succeeds triumphantly in showing that the issues are still alive, and that even if Locke cannot solve our problems, he has much to contribute to an understanding of them."—Susan L. Mendus, Ethics

". . . a comprehensive monograph that goes beyond a learned interpretation of Locke's texts to a reconstruction of a more plausible and contemporarily more acceptable, Lockean theory of rights . . . [T]his penetrating and sympathetic study is a welcome antidote to some tendentious recent monographs, of equal interest to the philosophically and historically inclined."—Ross Rudolph, Canadian Review of Political Science

"A detailed and comprehensive presentation of Lockean theory as a contribution to modern debates about rights, property, justice, government, and consent. It will be as indispensable to participants in these debates as it will to be those who are interested in the work of John Locke."—Jeremy Waldron, University of California, Berkeley

"[This book] is by far the most careful and balanced treatment of this central issue and will be of great value not only to philosophers but also to historians of ideas."—John Dunn, Cambridge University