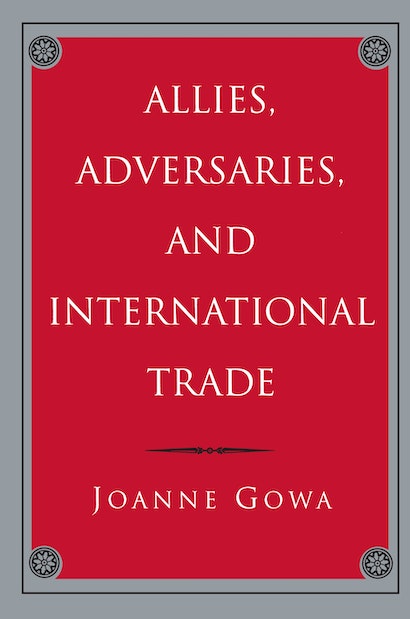 During the Cold War, international trade closely paralleled the division of the world into two rival political-military blocs. NATO and GATT were two sides of one coin; the Warsaw Treaty Organization and the Council for Mutual Economic Assistance were two sides of another. In this book Joanne Gowa examines the logic behind this linkage between alliances and trade and asks whether it applies not only after but also before World War II.

Joanne Gowa is Professor of Politics at Princeton University. She is the author of Closing the Gold Window: Domestic Politics and the End of Bretton Woods.

"The book is a first-rate contribution ... Gowa provides a novel way of thinking about the determinants of free trade, and compelling evidence that economics and security are intimately linked."—Millennium

"In uniting the fields of international security and political economy, this superb book succeeds where many others have failed. Quantitative and qualitative tests give empirical bite to its spare theoretical formulation. A reader's dream, this book is both thin and big."—Peter J. Katzenstein, Cornell University

"An outstanding and original book. Arguing that the security externalities created through international exchange affect the willingness of countries to adopt free trade, Gowa opens up an important new avenue of the political economy of trade policy. . . . This work will have a major impact on the study of international political economy. It will be required reading for everyone in that field—and many more in the areas of international relations, economics, and history."—David A. Lake, Institute on Global Conflict and Cooperation, University of California, San Diego