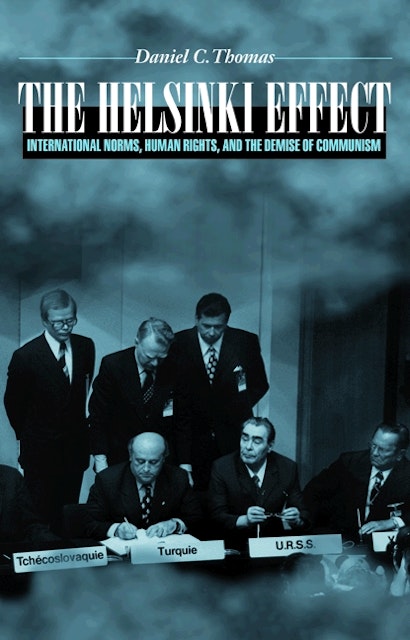 Human rights norms do matter. Those established by the Helsinki Final Act contributed directly to the demise of communism in the former East bloc, contends Daniel Thomas. This book counters those skeptics who doubt that such international norms substantially affect domestic political change, while explaining why, when, and how they matter most. Thomas argues that the Final Act, signed in 1975, transformed the agenda of East-West relations and provided a common platform around which opposition forces could mobilize. Without downplaying other factors, Thomas shows that the norms established at Helsinki undermined the viability of one-party Communist rule and thereby contributed significantly to the largely peaceful and democratic changes of 1989, as well as the end of the Cold War. Drawing on both governmental and nongovernmental sources, he offers a powerful Constructivist alternative to Realist theory’s failure to anticipate or explain these crucial events.


This study will fundamentally influence ongoing debates about the politics of international institutions, the socialization of states, the spread of democracy, and, not least, about the balance of factors that felled the Iron Curtain. It casts new light on Solidarity, Charter 77, and other democratic movements in Eastern Europe, the sources of Gorbachev’s reforms, the evolution of the European Union, U.S. foreign policy, and East-West relations in the final decades of the Cold War. The Helsinki Effect will be essential reading for scholars and students of international relations, international law, European politics, human rights, and social movements.

Daniel C. Thomas is Assistant Professor of Political Science at the University of Illinois at Chicago. During 1998-99, he was Jean Monnet Fellow at the European University Institute in Florence, Italy. He has coedited three books on international security issues.

"Thomas's work is valuable for a number of reasons. First, it serves as an excellent analysis of the emergence of the Helsinki process and its interpretation in the west and east. In addition, Thomas reminds us of the ways in which this language became an important part of the dissident movement and the emergence of civil society across the Soviet bloc. Finally, Thomas uses this discussion to challenge traditional thinking on international relations and the role of ideas, seeking to apply these lessons more broadly to the field."—Patrick O'Neil, Slavic Review

"Thomas has done a great job showing how the Helsinki human rights norms mattered. . . . The writing is excellent. The story is compelling."—Stephen D. Krasner, Stanford University

"The Helsinki Effect offers a very well written and accessible account of some of the most important historical events of our age, and a powerful argument about the role of Helsinki norms. This book will attract a wide readership in political science but will also appeal to audiences in history and sociology who are interested in social movements."—Martha Finnemore, George Washington University

"This book represents a major contribution to debates on the origins and effects of international norms. It argues that international norms can affect outcomes by transforming relations between state and societal actors. Above all, Thomas demonstrates in great detail and most convincingly how the Helsinki human rights norm contributed to the collapse of Communism and the end of the Cold War in Europe. Required reading for anybody interested in these themes!"—Thomas Risse, European University Institute