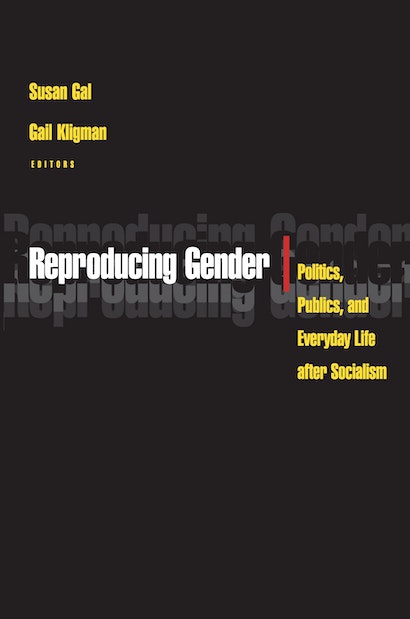 The striking fact that abortion was among the first issues raised, after 1989, by almost all of the newly formed governments of East Central Europe points to the significance of gender and reproduction in the postsocialist transformations. The fourteen studies in this volume result from a comparative, collaborative research project on the complex relationship between ideas and practices of gender, and political economic change. The book presents detailed evidence about women’s and men’s new circumstances in eight of the former communist countries, exploring the intersection of politics and the life cycle, the differential effects of economic restructuring, and women’s public and political participation. Individual contributions on the former German Democratic Republic, Poland, the Czech Republic, Slovakia, Hungary, Serbia, Romania, and Bulgaria provide rich empirical data and interpretive insights on postsocialist transformation analyzed from a gendered perspective. Drawing on multiple methods and disciplines, these original papers advance scholarship in several fields, including anthropology, sociology, women’s studies, law, comparative political science, and regional studies. The analyses make clear that practices of gender, and ideas about the differences between men and women, have been crucial in shaping the broad social changes that have followed the collapse of communism.

"The particular strength of the volume is that it includes many essays by scholars who are living what they analyze; eastern Europe is not viewed from within universities across the Atlantic, rather it is assessed by a number of scholars who are working in the countries they describe."—Robert G. Moeller, Journal of Social History

"This is an excellent and timely collection of essays, which I highly recommend. It is a truly collaborative project in which the authors address the same themes in different countries, and develop and apply analytical categories in different settings. These essays are based on serious primary research that combines the regional traditions of scholarship with disciplined social science methods and style. They introduce new concepts and ideas as well as propose new ways of analyzing social change. I am convinced that many of the arguments will be cited in the literature for years to come."—Eva Fodor, Dartmouth College