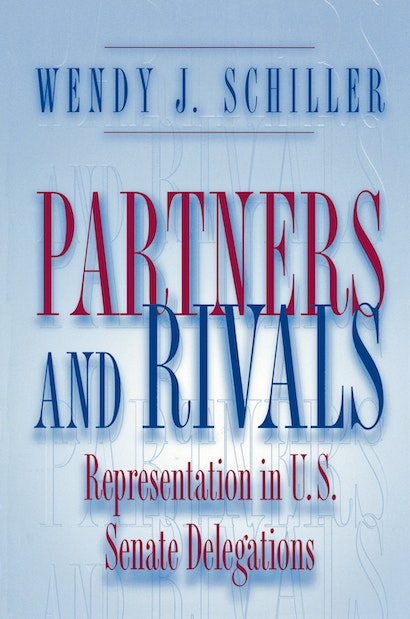 Congressional scholars have vastly underappreciated how representation in the U. S. Senate differs from the House of Representatives. In this provocative new study, Wendy J. Schiller develops a theory of dual representation — where two legislators share the same geographical constituency — to explain Senators’ behavior. Noting that Senators from the same state join different committees, focus on different policy areas, and address different economic interests through bill and amendment sponsorship, the author examines the electoral and institutional forces that elicit this competitive behavior. In developing her theory, Schiller relies on a wide variety of methodologies, from statistical analysis to case studies, and makes telling comparisons with similar situations in Latin America and Asia.

Partners and Rivals argues against the commonly held view that individual Senators do an inadequate job in representing their states. Instead, this book demonstrates how the competitive structure of Senate delegations creates the potential for broad and responsive representation in the Senate. When two senators from the same state are viewed as a pair, it becomes clear that their combined representational agendas include a wide range of the interests and opinions that exist among constituents in their state. This holds true whether the Senators are from the same party or not. Rich in details, Partners and Rivals is the most thorough and rigorous explanation of Senators’ behavior available.

"One of the more interesting and innovative contemporary works on the behavior of U. S. senators. . . . Schiller examines both systematic empirical data as well as individual case studies. Her data sources are both rich and diverse. . . . I would recommend this text for undergraduates, graduate students, and congressional scholars alike."—Greg Thorson, Congress and the Presidency

"Partners and Rivals: Representation in U.S. Senate Delegations is an important and thoroughly original contribution to understanding Senators' behavior. Wendy Schiller has produced a fine piece of political science that will be of interest to every student of Congress and to every scholar interested in how electoral institutions shape congressional behavior."—Gary Jacobson, University of California, San Diego

"Wendy Schiller has written a wonderful book that will be a landmark in the study of representation. There is nothing else like it in the range of methodologies employed and in the accessibility of the argument to a wide range of people. This is a book that is both scholarly and readable."—Eric M. Uslaner, University of Maryland