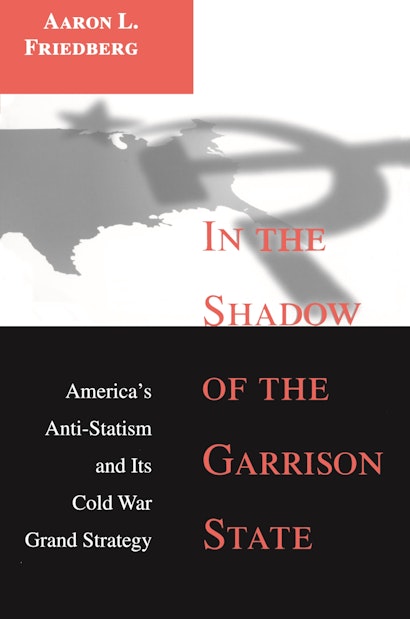 War — or the threat of war — usually strengthens states as governments tax, draft soldiers, exert control over industrial production, and dampen internal dissent in order to build military might. The United States, however, was founded on the suspicion of state power, a suspicion that continued to gird its institutional architecture and inform the sentiments of many of its politicians and citizens through the twentieth century. In this comprehensive rethinking of postwar political history, Aaron Friedberg convincingly argues that such anti-statist inclinations prevented Cold War anxieties from transforming the United States into the garrison state it might have become in their absence. Drawing on an array of primary and secondary sources, including newly available archival materials, Friedberg concludes that the “weakness” of the American state served as a profound source of national strength that allowed the United States to outperform and outlast its supremely centralized and statist rival: the Soviet Union.


Friedberg’s analysis of the U. S. government’s approach to taxation, conscription, industrial planning, scientific research and development, and armaments manufacturing reveals that the American state did expand during the early Cold War period. But domestic constraints on its expansion — including those stemming from mean self-interest as well as those guided by a principled belief in the virtues of limiting federal power — protected economic vitality, technological superiority, and public support for Cold War activities. The strategic synthesis that emerged by the early 1960s was functional as well as stable, enabling the United States to deter, contain, and ultimately outlive the Soviet Union precisely because the American state did not limit unduly the political, personal, and economic freedom of its citizens.

Aaron L. Friedberg is Professor of Politics and International Affairs and Director of the Research Program in International Security at Princeton University. He is author of The Weary Titan: Britain and the Experience of Relative Decline, 1895-1905 (Princeton).

"An engaging revisionist history of American society during the Cold War. . . Friedberg performs a real service: reminding us that democracies do a pretty good job of keeping peace as well."—Victor Davis Hanson, The Weekly Standard

"[A] lucid and meticulously documented study. . . . Though Friedberg's close analysis focuses on the period 1945-1960, it provides a framework that also illuminates subsequent events."—Patrick Glynn, Commentary

"Friedberg's account of the development of the American military-industrial complex is very convincing precisely because of the way in which he blends institutional and ideational analyses into a single coherent whole. The work is meticulously researched and is a must read for anyone interested in the diplomatic history of the United States."—Virginia Quarterly Review

"Essential . . . for anyone interested in the history of the American state as well as its future reform."—Andrew P.N. Erdmann, Orbis

"This is one of the most exciting books I've read in years. Friedberg is putting forth a sweeping and fundamental reassessment of the American military-industrial complex during the Cold War. It is historical revisionism in its very best sense: clearly written, thoroughly documented, and overwhelmingly convincing. Aaron Friedberg will emerge, with this book, as one of those rare scholars whose work redefines an entire field."—John Lewis Gaddis, Yale University

"Friedberg offers an important corrective to our tendency to assume that events had to turn out as they did by analyzing why the United States did not turn into a 'garrison state,' as many feared at the start of the Cold War. The research is meticulous, the story fascinating, and Friedberg's explanation in terms of the power of anti-state actors and ideology is convincing."—Robert Jervis, Columbia University

"This book will be a major contribution to a number of different literatures: it speaks to the extensive literature on war and state formation by exploring how different state mobilization strategies produce different outcomes. It contributes to the growing history of the Cold War by focusing attention on the important issue of the comparative political economy of defense mobilization.... It engages a number of current debates about the impact of domestic ideas, institutions, and regime types upon state behavior."—Michael Desch, Patterson School of Diplomacy and International Commerce, University of Kentucky