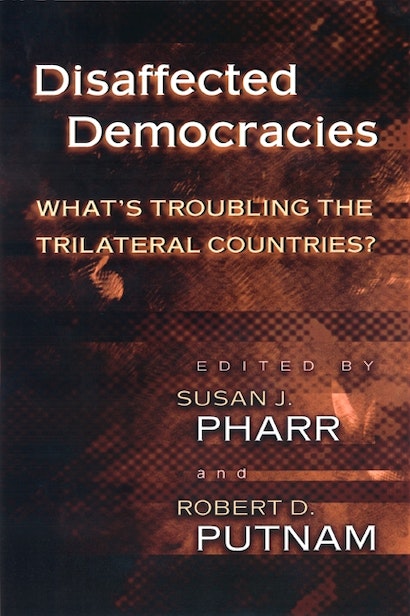 It is a notable irony that as democracy replaces other forms of governing throughout the world, citizens of the most established and prosperous democracies (the United States and Canada, Western European nations, and Japan) increasingly report dissatisfaction and frustration with their governments. Here, some of the most influential political scientists at work today examine why this is so in a volume unique in both its publication of original data and its conclusion that low public confidence in democratic leaders and institutions is a function of actual performance, changing expectations, and the role of information.


The culmination of research projects directed by Robert Putnam through the Trilateral Commission and the American Academy of Arts and Sciences, these papers present new data that allow more direct comparisons across national borders and more detailed pictures of trends within countries than previously possible. They show that citizen disaffection in the Trilateral democracies is not the result of frayed social fabric, economic insecurity, the end of the Cold War, or public cynicism. Rather, the contributors conclude, the trouble lies with governments and politics themselves. The sources of the problem include governments’ diminished capacity to act in an interdependent world and a decline in institutional performance, in combination with new public expectations and uses of information that have altered the criteria by which people judge their governments.


Although the authors diverge in approach, ideological affinity, and interpretation, they adhere to a unified framework and confine themselves to the last quarter of the twentieth century. This focus — together with the wealth of original research results and the uniform strength of the individual chapters — sets the volume above other efforts to address the important and increasingly international question of public dissatisfaction with democratic governance. This book will have obvious appeal for a broad audience of political scientists, politicians, policy wonks, and that still sizable group of politically minded citizens on both sides of the Atlantic and Pacific.

Susan J. Pharr is Edwin O. Reischauer Professor of Japanese Politics at Harvard University. She is the author of Political Women in Japan: The Search for a Place in Political Life and Losing Face: Status Politics in Japan. Robert D. Putnam is Peter and Isabel Malkin Professor of Public Policy at Harvard University. He is author of Making Democracy Work: Civic Traditions in Modern Italy (Princeton) and Bowling Alone: Decline and Renewal of the American Community.

"Robert Putnam and his associates have attacked head-on a question that disturbs many of us—the sense that trust long established in democratic governments seems to be eroding right at the time that the ideology of a democratic market system has swept the world. The authors make it evident that the answers aren't uniform among countries or easy. But their work also goes a long way toward putting the evidence, disturbing as it is, in broad perspective, a perspective essential for those who are working toward necessary reforms and new approaches."—Paul A. Volcker, North American Chairman, Trilateral Commission

"Susan Pharr and Robert Putnam have done a superb job not only of tracing the decline in public confidence in government performance in the established democracies over the past quarter-century but also of exploring how this disturbing trend can be explained. This book is certain to be widely discussed by scholars and policy makers concerned with the future of democratic government."—Marc F. Plattner, Director, International Forum for Democratic Studies

"Disaffected Democracies provides a thoughtful and wise analysis of the present state of democracy in the Trilateral countries. . . . [It] will be indispensable reading, both for active politicians and others in public life, and for students of international relations and political science."—Shirley Williams, British House of Lords

"Anyone who wants to understand the state of the art on this matter should, and I hope will, read this book. There is simply no other work like it."—Robert A. Dahl, Yale University