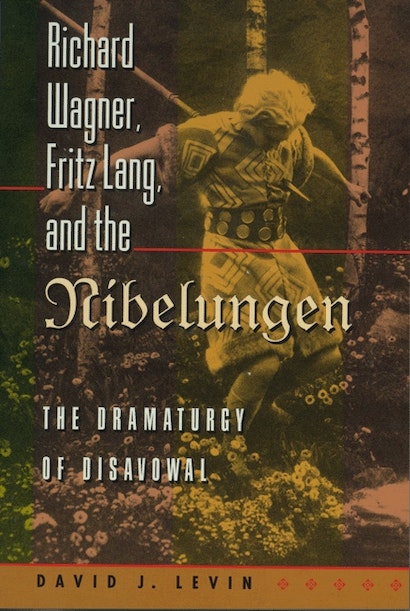 This highly original book draws on narrative and film theory, psychoanalysis, and musicology to explore the relationship between aesthetics and anti-Semitism in two controversial landmarks in German culture. David Levin argues that Richard Wagner’s opera cycle Der Ring des Nibelungen and Fritz Lang’s 1920s film Die Nibelungen creatively exploit contrasts between good and bad aesthetics to address the question of what is German and what is not. He shows that each work associates a villainous character, portrayed as non-Germanic and Jewish, with the sometimes dramatically awkward act of narration. For both Wagner and Lang, narration — or, in cinematic terms, visual presentation — possesses a typically Jewish potential for manipulation and control. Consistent with this view, Levin shows, the Germanic hero Siegfried is killed in each work by virtue of his unwitting adoption of a narrative role.


Levin begins with an explanation of the book’s theoretical foundations and then applies these theories to close readings of, in turn, Wagner’s cycle and Lang’s film. He concludes by tracing how Germans have dealt with the Nibelungen myths in the wake of the Second World War, paying special attention to Michael Verhoeven’s 1989 film The Nasty Girl. His fresh and interdisciplinary approach sheds new light not only on Wagner’s Ring and Lang’s Die Nibelungen, but also on the ways in which aesthetics can be put to the service of aggression and hatred. The book is an important contribution to scholarship in film and music and also to the broader study of German culture and national identity.

David J. Levin is Associate Professor of Germanic Languages and Literature at the University of Chicago. He is the editor of Opera Through Other Eyes. In addition to his academic work, he has served as a dramaturg at the Frankfurt Opera, the Bremen Opera, and the Frankfurt Ballet.

"This is a smart and thoroughly absorbing book. Its focus is not on a single genre but on the uses that have been made of the Nibelung legend to help shape German national and cultural identity.... A subtly argued study of how the works under consideration 'render their politics in an aesthetic register.'"—Herbert Lindenberger, Quarterly Journal of the Modern Language Association

"[David J. Levin] deftly executes his readings of Wagner and Lang, and the book's keen, unencumbered prose and practicable assessments ... perhaps a partial dividend of its author's work as Dramaturg at the Frankfurt Opera ... encourages the broad readership of this study."—Kelly Barry, Modern Language Notes

"Richard Wagner, Fritz Lang, and the Nibelungen engages in close textual readings in order to shed light on much larger cultural issues and fault lines. . . . This brief summary can barely do justice to the richness and originality of Levin's many brilliant interpretive moves."—Lutz Koepnick, Modernism/Modernity

"This book will have a major impact not just on scholarship on Wagner and Lang, or even in the areas of music and film; I am confident that it will also produce a new reflection on the relationship between close readings of individual cultural objects and broader thinking on issues such as German national identity and self-understanding."—Michael W. Jennings, Princeton University