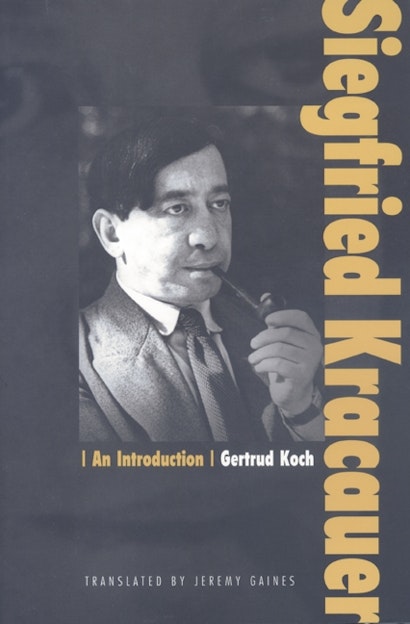 Siegfried Kracauer has been misunderstood as a naïve realist, appreciated as an astute critic of early German film, and noticed as the interesting exile who exchanged letters with Erwin Panofsky. But he is most widely thought of as the odd uncle of famed Frankfurt School critical theorists Jürgen Habermas, Theodor Adorno, Walter Benjamin, and Max Horkheimer. Recently, however, scholars have rediscovered in Kracauer’s writings a philosopher, sociologist, and film theorist important beyond his associations — and perhaps one of the most significant cultural critics of the twentieth century. Gertrud Koch advances this Kracauer renaissance with the first-ever critical assessment of his entire body of work.


Koch’s analysis, which is concise without sacrificing thoroughness or sophistication, covers both Kracauer’s best-known publications (e.g., From Caligari to Hitler, in which he gleans the roots of National Socialism in the films of the Weimar Republic) and previously underexamined texts, including two newly discovered autobiographical novels. Because Kracauer’s wide-ranging works emerge from no rigidly unified approach, instead always remaining open to unusual and highly individual perspectives, Koch resists the temptation to force generalization. She does, however, identify recurring tropes in Kracauer’s lifetime effort to perceive the basic posture and composition of particular cultures through their visual surfaces. Koch also finds in Kracauer a surprisingly contemporary cultural commentator, whose ideas speak directly to current discussions on film, urban modernity, feminism, cultural representation, violence, and other themes.


This book was long-awaited in Germany, as well as widely and well reviewed. Now translated into English for the first time, it will fuel already growing interest in the United States, where Kracauer lived and wrote from 1941 until his death in 1966. It will attract the attention of students and scholars working in Film Studies, German Studies, Comparative Literature, Critical Theory, Cultural Studies, Philosophy, and History.

Gertrud Koch is Professor of Film and Television at the Ruhr-University in Bochum and author of numerous books and papers on film and visual representation.

"Koch does an admirable job of providing a greater sense . . . of Kracauer's life and work. Implicit in her reevaluation is the understanding that readers, especially on this side of the Atlantic, still have much to discover.""—Noah Isenberg, Dissent