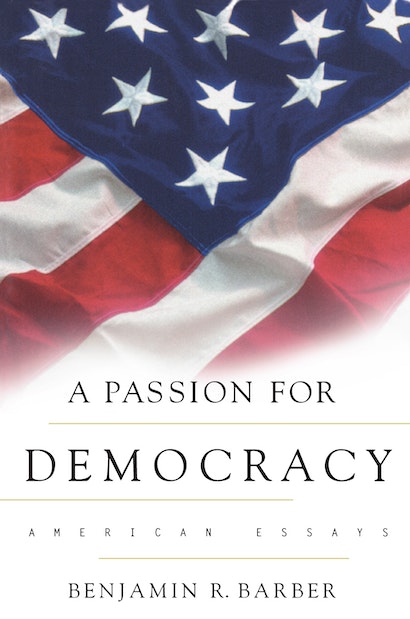 Benjamin Barber is one of America’s preeminent political theorists. He has been a significant voice in the continuing debate about the nature and role of democracy in the contemporary world. A Passion for Democracy collects twenty of his most important writings on American democracy. Together they refine his distinctive position in democratic theory. Barber’s conception of “strong democracy” contrasts with traditional concepts of “liberal democracy,” especially in its emphasis on citizen participation in central issues of public debate. These essays critique the “thin representation” of liberal democracy and buttress the arguments presented in Barber’s twelve books, most recently in his well-received Jihad vs. McWorld: How Globalism and Tribalism Are Re-shaping the World. In these pieces, Barber argues for participatory democracy without dependence on abstract metaphysical foundations, and he stresses the relationship among democracy and civil society, civic education, and culture.

A Passion for Democracy is divided into four sections. In the first, “American Theory: Democracy, Liberalism, and Rights,” Barber addresses issues of ongoing relevance to today’s debates about the roots of participatory democracy, including individualism vs. community, the importance of consent, and the irrelevance of Marxism. Essays in the second section, “American Practice: Leadership, Citizenship, and Censorship” provide a “strong democracy” critique of American democratic practice. “Education for Democracy: Civic Education, Service, and Citizenship” applies Barber’s theories to three related topics and includes his much-discussed essay “America Skips School.” The final section, “Democracy and Technology: Endless Frontier or End of Democracy?” provides glimpses into a future that technology alone cannot secure for democracy.


In his preface, Barber writes: “In these essays … I have been hard on my country. Like most ardent democrats, I want more for it than it has achieved, despite the fact that it has achieved more than most people have dared to want.” This wide-ranging collection displays not only his passion for democracy, but also his unique perspective on issues of abiding importance for the democratic process.

Benjamin R. Barber is Whitman Professor of Political Science and Director of the Walt Whitman Center for the Culture and Politics of Democracy at Rutgers University. Among his many books are The Conquest of Politics (Princeton), which collects his philosophical essays, An Aristocracy of Everyone, and Jihad vs. McWorld.

"Barber opens up the way for reexamining just what our role must be in the cause of Democracy. A stunning and sobering look at civil society at the century's end."—Virginia Quarterly Review

"Enlightening.... Politicians and history teachers, citizens even, would be wise to pick up this collection."—Kathleen Daley, Newark Star-Ledger

"The essays in A Passion for Democracy offer nuggets of keen historical insight and every so often connect with a sharp dart to the complacent regions of liberal capitalism. . . . It doesn't hurt that, in an arena in which turgid, jargon-ridden prose is the rule, Barber can spin a phrase with the dexterity of Derek Jeter turning a double-play at second base."—Loren Lomasky, Reason

"If I were to put together a short list of a dozen scholars who might. . .contribute to the rhetoric and thought of a presidency, I would put Ben Barber on the list."—William Galston, former deputy assistant for domestic policy to Bill Clinton (quoted in The Chronicle of Higher Education