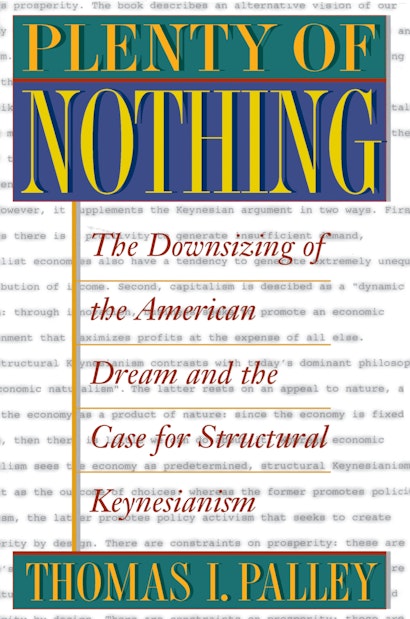 Business papers today are in a triumphant mood, buoyed by a conviction that the economic stagnation of the last quarter century has vanished in favor of a new age of robust growth. But if we are doing so well, many ask, why does it feel like we are working harder for less? Why, despite economic growth, does inequality between rich and poor keep rising? In this wide-ranging and provocative book, Thomas Palley pulls together many threads of “new liberal” economic thought to offer detailed answers to these pressing questions. And he proposes a new economic model — structural Keynesianism — that he argues would return America to sustainable, fairly shared prosperity. The key, he writes, is to abandon the myth of a natural competitive economy, which has justified unleashing capital and attacking unions. This has resulted in an economy dominated by business.


Palley’s book, which began as a cover article for The Atlantic Monthly in 1996, challenges the economic orthodoxies of the political right and center, popularized by such economists as Milton Friedman and Paul Krugman. He marshals a powerful array of economic facts and arguments to show that the interests of working families have gradually been sacrificed to those of corporations. Expanding on traditional Keynesian economics, he argues that, although capitalism is the most productive system ever devised, it also tends to generate deep economic inequalities and encourage the pursuit of profit at the expense of all else. He challenges fatalists who say we can do nothing about this — that economic insecurity and stagnant wages are the inevitable results of irresistible globalization. Palley argues that capitalism comes in a range of forms and that government can and should shape it from a “mean street” system into a “main street” system through monetary, fiscal, trade, and regulatory policies that promote widespread prosperity.

Plenty of Nothing offers a compelling alternative to conventional economic wisdom. The book is clearly and powerfully written and will provoke debate among economists and the general public about the most stubborn problems in the American economy.

Thomas I. Palley is Assistant Director of Public Policy (Economics) at the AFL-CIO and the author ofPost-Keynesian Economics: Debt, Distribution, and the Macro Economy.

"This is a good and useful book. At a time when mediocre economic performance is celebrated as though it were excellent . . . Plenty of Nothing is for people who are tired of being treated like fools. . . . The revolutionary thought that policy does matter, for good or evil, is a prime contribution of this book, though it is a mark of the degraded state of economic discourse that it is needed at all."—James K. Galbraith, Dissent

"Thomas Palley has presented us with a timely book . . . a necessary book. . . . It reminds us that we do not have to accept Wall Street's version of the choices we face."—Robert E. Prasch, Review of Political Economy

"A useful and often insightful treatise on policy debates and recent economic debates in the United States. He ably documents and explains 'the downsizing of the American dream.'"—James Devine, Science & Society

"Thomas I. Palley has written an important book in a clear and persuasive style. He understands the economic plight of working American families. He explains what caused that plight and what can be done about it. . . . His analysis is rigorous. His conclusions are correct. His policies are the right stiff. He discusses the kind of family policy we need for the next millennium."—William M. Dugger, Review of Social Economy