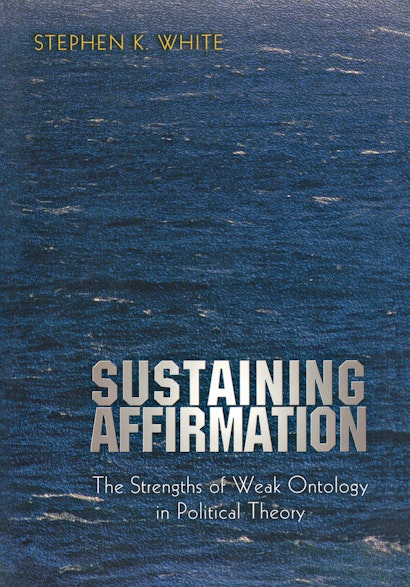 In light of many recent critiques of Western modernity and its conceptual foundations, the problem of adequately justifying our most basic moral and political values looms large. Without recourse to traditional ontological or metaphysical foundations, how can one affirm — or sustain — a commitment to fundamentals? The answer, according to Stephen White, lies in a turn to “weak” ontology, an approach that allows for ultimate commitments but at the same time acknowledges their historical, contestable character. This turn, White suggests, is already underway. His book traces its emergence in a variety of quarters in political thought today and offers a clear and compelling account of what this might mean for our late modern self-understanding.

As he elaborates the idea of weak ontology and the broad criteria behind it, White shows how these are already at work in the thought of contemporary writers of seemingly very different perspectives: George Kateb, Judith Butler, Charles Taylor, and William Connolly. Among these thinkers, often thought to be at odds, he exposes the commonalities that emerge around the idea of weak ontology. In its identification of a critical turn in political theory, and its nuanced explanation of that turn, his book both demonstrates and underscores the strengths of weak ontology.

"This is an excellent and refreshing book whose brevity and modest tone belie its substantial achievement."—Patchen Markell, Ethics

"A timely contribution to the contemporary debates regarding democracy, pluralism, and the limits of political liberalism."—Brett T. Wilmot, The Journal of Religion

"Sustaining Affirmation is a highly original project that is brilliantly executed and leaves recent political thought looking different than in any other of our current attempts to understand it."—Morton Schoolman, American Political Science Review

"This thoughtful and timely work consists of close engagements with four influential contemporary political thinkers. The book will be valuable for students of these thinkers, to the thinkers themselves, and to anyone interested in the question of how to think about morals and politics in these late modern times."—Richard E. Flathman, Journal of Politics

"A powerful vision of the world and a sustaining vision of what human beings can get from that world. It has been a long time since a book made me think and rethink so much. One could not ask for more."—Simone Chambers, Constellations

"The topic White has made his own is both a difficult one to engage and the topic that political theorists and philosophers will avoid at their peril over the next decade. The book itself is pathbreaking: partly because it demonstrates through its very comparisons the incorrigibility of the ontological dimension of political thought; partly because White works so effectively within and between the texts he examines, carrying them to places they had resisted, or had not been prepared to go. A timely and effective book."—William Connolly, The Johns Hopkins University

"A significant contribution to political theory, this book presents a systematic and rich account of how theorizing informed by what we might call a postmodern sensibility can go beyond 'deconstruction' to develop 'positive' or 'affirmative' accounts of moral and political life, without abandoning the critique of foundationalism."—J. Donald Moon, Wesleyan University