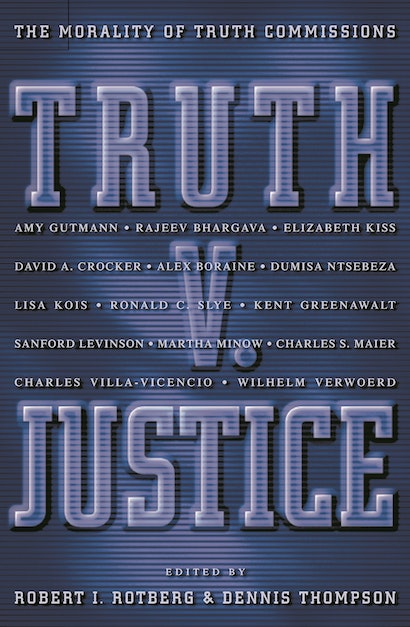 The truth commission is an increasingly common fixture of newly democratic states with repressive or strife-ridden pasts. From South Africa to Haiti, truth commissions are at work with varying degrees of support and success. To many, they are the best — or only — way to achieve a full accounting of crimes committed against fellow citizens and to prevent future conflict. Others question whether a restorative justice that sets the guilty free, that cleanses society by words alone, can deter future abuses and allow victims and their families to heal. Here, leading philosophers, lawyers, social scientists, and activists representing several perspectives look at the process of truth commissioning in general and in post-apartheid South Africa. They ask whether the truth commission, as a method of seeking justice after conflict, is fair, moral, and effective in bringing about reconciliation.


The authors weigh the virtues and failings of truth commissions, especially the South African Truth and Reconciliation Commission, in their attempt to provide restorative rather than retributive justice. They examine, among other issues, the use of reparations as social policy and the granting of amnesty in exchange for testimony. Most of the contributors praise South Africa’s decision to trade due process for the kinds of truth that permit closure. But they are skeptical that such revelations produce reconciliation, particularly in societies that remain divided after a compromise peace with no single victor, as in El Salvador. Ultimately, though, they find the truth commission to be a worthy if imperfect instrument for societies seeking to say “never again” with confidence. At a time when truth commissions have been proposed for Bosnia, Kosovo, Cyprus, East Timor, Cambodia, Nigeria, Palestine, and elsewhere, the authors’ conclusion that restorative justice provides positive gains could not be more important.

Robert I. Rotberg is President of the World Peace Foundation and Director of the Program on Intrastate Conflict at Harvard's Kennedy School. He is author or editor of dozens of books on Africa, Asia, and the Caribbean, including Creating Peace in Sri Lanka: Civil War and Reconciliation (1999), War and Peace in Southern Africa (1998), Vigilance and Vengeance: NGOs Preventing Ethnic Conflict in Divided Societies (1996), and The Founder: Cecil Rhodes and the Pursuit of Power (1988). Dennis Thompson is Alfred North Whitehead Professor of Political Philosophy and Director of the Program in Ethics and the Professions at Harvard University. He is author of Political Ethics and Public Office (1987) and coauthor, with Amy Gutmann, of Democracy and Disagreement (1996).

"This volume of essays, which concentrates on the South African experience while drawing on others elsewhere, is a useful and timely reminder of the tough and messy compromises that were made between the competing demands of justice and retribution, peace and forgiveness."—The Economist

"This is an important book for those interested in contemporary efforts to deal with modern atrocities . . . The diverse group of contributors brings exceptionally wide exposure and depth to the subject."—Booklist

"An engaging collection of essays . . ."—Reed Brody, The Nation

"The essays themselves are accessible clear, well-written, and engaging and extraordinarily relevant as we struggle to develop an appropriate response to oppressive regime throughout the world. Truth v. Justice's greatest strength lies in both the individual and collective force of the essays each of which not only is intelligently written and important in its own right, but also demonstrative of the author's clear engagement with one another's concerns. The result is a comprehensive and thought-provoking analysis of the truth commission."—Karen Newirth, International Law and Politics

"One of the most painful and conspicuous gaps is the impunity usually enjoyed, after their removal from power, by men who, while in power, trampled on the human rights of their own pwople or even waged war against them. Truth v. Justice focuses on the most promising device our civilization has invented to remedy that particular and all too familiar shortfall of justice."—Geoffrey Best, Times Literary Supplement

"This book discusses the vast and complex range of choices in between blanket amnesty and total accountability through criminal justice, and does so with engaged and critical sympathy."—Albie Sachs, Justice of the Constitutional Court of South Africa

"The case for truth commissions is strongly and persuasively presented in these essays, which bring together a remarkable group of lawyers, political theorists, and historians, all of them intelligently engaged with each other's concerns."—Michael Walzer

"Truth commissions have become important institutions to support societies in transition from oppression to democracy. In this outstanding collection of essays well qualified experts consider the legal, political and moral issues associated with such truth commissions."—Richard Goldstone, Justice of the Constitutional Court of South Africa

"This important and innovative text brings together a group of highly accomplished scholars to study one of the most astonishing developments of our times: the thoughtful establishment of commissions to promote reconciliation and reveal truth instead of punishing past offenders."—Jeffrey Herbst, author of States and Power in Africa