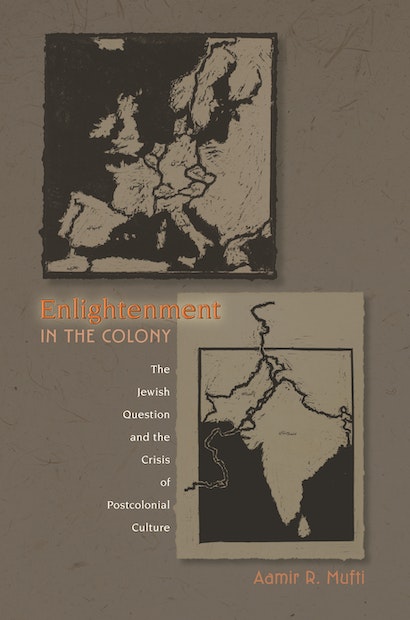 Enlightenment in the Colony opens up the history of the “Jewish question” for the first time to a broader discussion — one of the social exclusion of religious and cultural minorities in modern times, and in particular the crisis of Muslim identity in modern India.


Aamir Mufti identifies the Hindu-Muslim conflict in India as a colonial variation of what he calls “the exemplary crisis of minority” — Jewishness in Europe. He shows how the emergence of this conflict in the late nineteenth century represented an early instance of the reinscription of the “Jewish question” in a non-Western society undergoing modernization under colonial rule. In so doing, he charts one particular route by which this European phenomenon linked to nation-states takes on a global significance.


Mufti examines the literary dimensions of this crisis of identity through close readings of canonical texts of modern Western — mostly British-literature, as well as major works of modern Indian literature in Urdu and English. He argues that the one characteristic shared by all emerging national cultures since the nineteenth century is the minoritization of some social and cultural fragment of the population, and that national belonging and minority separatism go hand in hand with modernization.

Enlightenment in the Colony calls for the adoption of secular, minority, and exilic perspectives in criticism and intellectual life as a means to critique the very forms of marginalization that give rise to the uniquely powerful minority voice in world literatures.

Aamir R. Mufti is Associate Professor of Comparative Literature at the University of California, Los Angeles. He is the coeditor of Dangerous Liaisons: Gender, Nation, and Postcolonial Perspectives and the editor of "Critical Secularism," a special issue of the journal boundary 2.

"By the late eighteenth-century...the 'protean Jew' was...'neither outsider nor one of us'. Mufti begins with the 'paradigmatic narratives' of minority existence within a liberal nation state...which constituted the so-called Jewish Question in modern Europe. He is especially concerned with the processes of secularization...[and focuses] on the connections between the violent resolution of the 'Jewish Question' and the formation of 'majoritarian' cultures. Mufti [provides] nuanced and historically grounded accounts of the 'Jewish Question'. At a time when these issues have assumed a renewed urgency—under the febrile sign of a 'new' anti-Semitism—[this] outstanding [book offers] a contextualized and scholarly approach to the subject."—Bryan Cheyette, Times Literary Supplement

"Aamir Mufti's Enlightenment in the Colony: The Jewish Question and the Crisis of Postcolonial Culture offers the most substantial theoretical intervention, one that is likely to have a significant impact on the field in future years."—New Literatures

"This is a remarkable exploration of the idea of the 'minority.' Through close and historically situated readings of literary and political texts in German, English, and Urdu, Mufti has produced a comparative account of Jewish and Muslim minority-ness in Europe and India that is both dazzling and profound. An outstanding first book from a brilliant young mind."—Partha Chatterjee, Director of the Centre for Studies in Social Sciences, Calcutta

"Enlightenment in the Colony is a bold and original book which demonstrates the profound link between the 'Jewish question,' as it tragically unfolds in twentieth-century Europe, and the crisis of partition and of Muslim identity in India. It is one of those arguments that, as soon as it is made, seems at once unanswerable and of unprecedented significance. With impressive erudition, Aamir Mufti grounds his analysis in readings of literary works, from George Eliot's Daniel Deronda to the lyrical poetry of Faiz Ahmed Faiz, which are subtle and persuasive. A major contribution to our understanding of minority cultures, Enlightenment in the Colony should establish Mufti as a key intellectual presence in debates about secularism and postcolonial culture today."—Jacqueline Rose, author of The Question of Zion

"A captivating and provocative work of cross-disciplinary and comparative literary scholarship that deploys the critical legacies of the 'Jewish question' in German and English literature to analyze the crisis of postcolonial secularism and Muslim identity in Indian and Pakistani writers. In a series of brilliant readings of dramatic, narrative, and poetic texts, Aamir Mufti posits a vernacular modernity and moves us toward a critical secularism that fully captures the fractures and disjunctions of Enlightenment thought that continue to fuel political conflicts in the Middle East and in South Asia today."—Andreas Huyssen, Columbia University, author of Present Pasts: Urban Palimpsests and the Politics of Memory

"This is a splendid, challenging, major work. Mufti combines rare erudition with great critical intelligence and an attention to major issues. The book carries forward its inquiry by means of two brilliant insights. First, one may both illuminate and reposition the question of communalism within democratic, secular, independent India by recognizing its structural relation and historical connections to the 'Jewish question' within the European liberal Enlightenment. Second, one may further focus the issue by pursuing the evolution of the Urdu language and its literature, as reshaped first in the aftermath of the 1857 rebellion and then by the dual nationalist pressures of India and Pakistan after partition. Mufti's concern with the conditions that make possible, and complex, such a thing as 'minority identity' means that this book will offer resources to students of Palestine, Ireland, and no doubt other tough cases."—Jonathan Arac, University of Pittsburgh, author of The Emergence of American Literary Narrative, 1820-1860