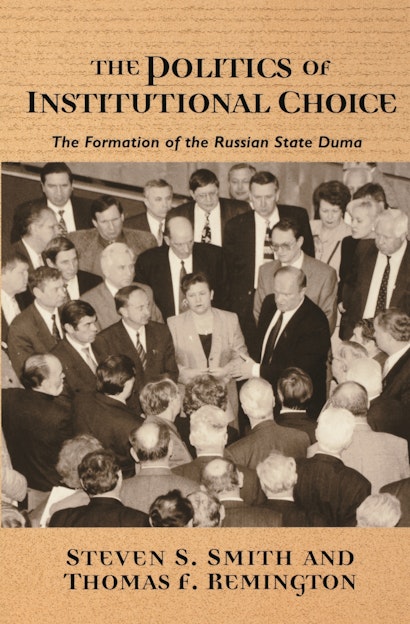 Events in Russia since the late 1980s have created a rare opportunity to watch the birth of democratic institutions close at hand. Here Steven Smith and Thomas Remington provide the first intensive, theoretically grounded examination of the early development of the State Duma, the lower house of the Russian Federation’s parliament created by the 1993 constitution. They offer an integrated account of the choices made by the newly elected members of the Duma in establishing basic operating arrangements: an agenda-setting governing body, a standing committee system, an electoral law, and a party system. Not only do these decisions promise to have lasting consequences for the post-communist Russian regime, but they also enable the authors to test assumptions about politicians’ goals from the standpoint of institutional theory.


Smith and Remington challenge in particular the notion, derived from American contexts, that politicians pursue a single, overarching goal in the creation of institutions. They argue that politicians have multiple political goals — career, policy, and partisan — that drive their choices. Among Duma members, the authors detect many cross currents of interests, generated by the mixed electoral system, which combines both single-member districts and proportional representation, and by sharp policy divisions and an emerging party system. Elected officials may shift from concentrating on one goal to emphasizing another, but political contexts can help determine their behavior. This book brings a fresh perspective to numerous theories by incorporating first-hand accounts of major institutional choices and placing developments in their actual context.

Steven S. Smith is a McKnight University Distinguished Professor of Political Science and Law at the University of Minnesota. He is the author of The American Congress and Call to Order: Floor Politics in the House and Senate. He has coauthored Committees in Congress, Managing Uncertainty in the House of Representatives, and Politics or Principle? Filibustering in the United States Senate.
Thomas F. Remington is Claus M. Halle Distinguished Professor for Global Learning at Emory University. His books include Politics in Russia, Parliaments in Transition, The Truth of Authority: Ideology and Communication in the Soviet Union, and Building Socialism in Bolshevik Russia.

"A major addition to our understanding both of how institutions came to be formed as they were in Russia and how they are functioning."—Karen Dawisha, Journal of Politics

"This book will undoubtedly prove to be indispensable reading for any serious student of post-Soviet Russian politics."—John T. Ishiyana, International Politics

"Smith and Remington use the case of the Russian Duma to address questions at the cutting edge of legislative research in political science. As many leading scholars have noted, we are only beginning to understand how institutions are chosen. These authors tell a convincing story about the key factors influencing institutional choices in the Russian context. In particular, their study provides new insights into the relative importance of electoral, policy, and partisan incentives on legislators' choices. Their findings regarding the ubiquitous impact of electoral rules and competition on legislators' behavior (most importantly their choice of institutional arrangements) represent a major contribution to political science."—Josephine T. Andrews, University of California, Davis

"Making sense of institutional choice, in any context, is an important task. Extending our knowledge about a major new democracy makes Smith and Remington's book especially worthwhile to read. The authors draw a number of reasonable hypotheses from the literature on institutional choice and put together a remarkable data set on the Russian Duma and its members. Combining votes on bills together with surveys of Duma candidates and members is an extraordinary achievement. The authors have crafted a valuable story about institutional and political evolution in Russia."—Mathew D. McCubbins, University of California, San Diego