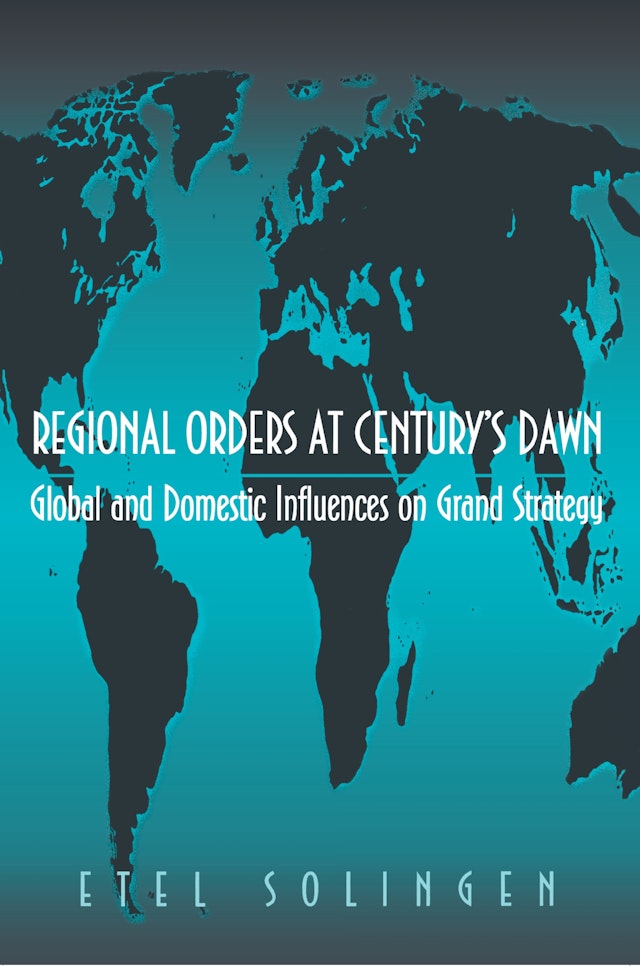 Etel Solingen provides a comprehensive explanation of foreign policy based on how states throughout the world have confronted the rapid emergence of a global economy and international institutions. A major advance in international relations theory, Regional Orders at Century’s Dawn skillfully uses a key issue — internationalization — to clarify other recent debates, from the notion of a democratic peace to the relevance of security dilemmas, nationalism, and the impact of international institutions. The author discusses in rich detail the Middle East, Latin America’s Southern Cone, and the Korean peninsula, and builds on examples drawn from almost every other region of the world.

As Solingen demonstrates, economic liberalization — with its dramatic political and economic consequences — invariably attracts supporters and detractors, who join in coalitions to advance their agendas. Each coalition’s agenda, or “grand strategy,” has consequences at all levels: domestic, regional, and international. At home, coalitions struggle to define the internal allocation and management of resources, and to undermine their rivals. Throughout their regional neighborhoods, coalitions opposing internationalization often compete for dominance, sometimes militarily. Coalitions favoring internationalization, instead, often cooperate. At the global level, each coalition finds support for its “grand strategies” from different international institutions and from competing global economic trends. Solingen’s concept of “grand strategy” proposes more than a theory of foreign policy and explains the role of nationalism and ethno-religious revivalism in the politics of liberalization.

Etel Solingen is Professor of Politics and Society at the University of California, Irvine.

"A penetrating and timely contribution to the literature on international and regional conflict."—Choice

"[This book] bridges the divide between international political economy and security studies. . . . A new explanation for regional conflict and cooperation. . . . One of Solingen's main contributions is to offer a causal mechanism that can account for peace among democratic and nondemocratic dyads."—Miriam Fendius Elman, Harvard University Belfer Center for Science and International Affairs, International Studies Review

"A sophisticated theoretical interpretation of internationalism at the end of the century."—Anthony Smith, Institute of Southeast Asian Studies, Singapore, Contemporary Southeast Asia

"A refreshing challenge to some conventional wisdoms."—Helge Hveem, University of Oslo, Australian Journal of Political Science