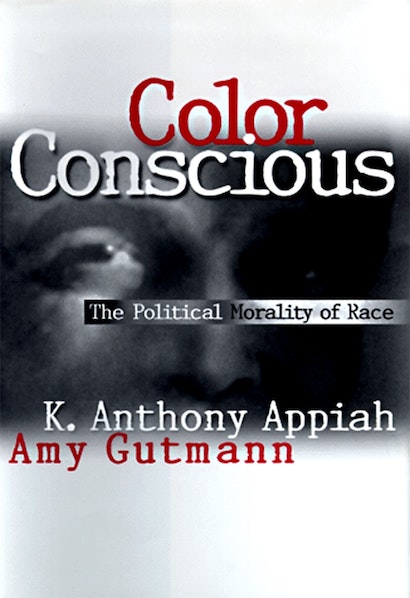 In America today, the problem of achieving racial justice — whether through “color-blind” policies or through affirmative action — provokes more noisy name-calling than fruitful deliberation. In Color Conscious, K. Anthony Appiah and Amy Gutmann, two eminent moral and political philosophers, seek to clear the ground for a discussion of the place of race in politics and in our moral lives. Provocative and insightful, their essays tackle different aspects of the question of racial justice; together they provide a compelling response to our nation’s most vexing problem.


Appiah begins by establishing the problematic nature of the idea of race. He draws on the scholarly consensus that “race” has no legitimate biological basis, exploring the history of its invention as a social category and showing how the concept has been used to explain differences among groups of people by mistakenly attributing various “essences” to them. Appiah argues that, while people of color may still need to gather together, in the face of racism, under the banner of race, they need also to balance carefully the calls of race against the many other dimensions of individual identity; and he suggests, finally, what this might mean for our political life.


Gutmann examines alternative political responses to racial injustice. She argues that American politics cannot be fair to all citizens by being color blind because American society is not color blind. Fairness, not color blindness, is a fundamental principle of justice. Whether policies should be color-conscious, class conscious, or both in particular situations, depends on an open-minded assessment of their fairness. Exploring timely issues of university admissions, corporate hiring, and political representation, Gutmann develops a moral perspective that supports a commitment to constitutional democracy.


Appiah and Gutmann write candidly and carefully, presenting many-faceted interpretations of a host of controversial issues. Rather than supplying simple answers to complex questions, they offer to citizens of every color principled starting points for the ongoing national discussions about race.

"Despite tremendous ongoing discussion of racial issues in this country, American opinions about race remain contentious and nowhere near a national consensus. . .Each co-author devotes one-half of the book to his or her efforts to bring insight and illumination to what is an often gloomy conversation."—Washington Post Book World

"Appiah and Gutmann articulate with precision and subtlety those intricate issues of race that confound us all."—Toni Morrison

"Color Conscious is an extremely welcome addition to the discourse on race. In different but complementary ways, Appiah and Gutmann articulate with precision and subtlety those intricate issues of race that confound us all."—Toni Morrison, author of Jazz, Beloved, Song of Solomon, and other literary works

"Without dogma or cant, two of our most challenging and clear-eyed public philosophers explore the real meanings of culture and identity. An invaluable resource for all who want to think responsibly about the racial dilemmas facing our nation."—Henry Louis Gates, Jr., W.E.B. DuBois Professor of the Humanities and Chair of the Afro-American Studies Department, Harvard University

"This volume brings together two sets of conversations, one about justice and fundamental fairness, the other about racial identity. Anthony Appiah and Amy Gutmann, two 'passionate democrats,' lower the decibel level and raise by several units of decency and infinite degrees of intelligence the caliber of public discourse on race. Assisted by Harvard professor David Wilkins' wonderful introduction, these formidable scholars each remind us that principles of justice and ideas about race are interdependent and must speak to the actual conditions in which we live."—Lani Guinier