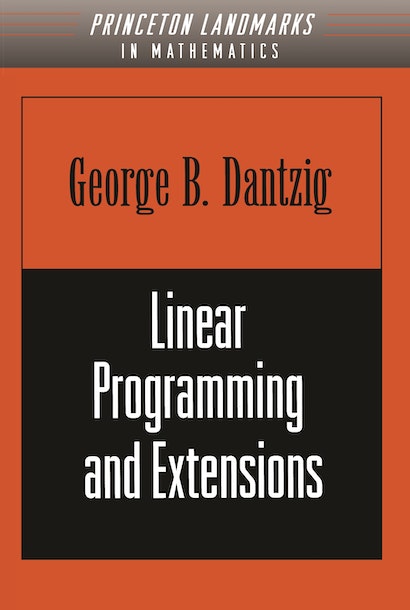 In real-world problems related to finance, business, and management, mathematicians and economists frequently encounter optimization problems. In this classic book, George Dantzig looks at a wealth of examples and develops linear programming methods for their solutions. He begins by introducing the basic theory of linear inequalities and describes the powerful simplex method used to solve them. Treatments of the price concept, the transportation problem, and matrix methods are also given, and key mathematical concepts such as the properties of convex sets and linear vector spaces are covered.


George Dantzig is properly acclaimed as the “father of linear programming.” Linear programming is a mathematical technique used to optimize a situation. It can be used to minimize traffic congestion or to maximize the scheduling of airline flights. He formulated its basic theoretical model and discovered its underlying computational algorithm, the “simplex method,” in a pathbreaking memorandum published by the United States Air Force in early 1948. Linear Programming and Extensions provides an extraordinary account of the subsequent development of his subject, including research in mathematical theory, computation, economic analysis, and applications to industrial problems.


Dantzig first achieved success as a statistics graduate student at the University of California, Berkeley. One day he arrived for a class after it had begun, and assumed the two problems on the board were assigned for homework. When he handed in the solutions, he apologized to his professor, Jerzy Neyman, for their being late but explained that he had found the problems harder than usual. About six weeks later, Neyman excitedly told Dantzig, “I’ve just written an introduction to one of your papers. Read it so I can send it out right away for publication.” Dantzig had no idea what he was talking about. He later learned that the “homework” problems had in fact been two famous unsolved problems in statistics.

George B. Dantzig is Professor Emeritus in the Department of Engineering-Economic Systems and Operations Research at Stanford University.

"The author of this book was the main force in establishing a new mathematical discipline, and he has contributed to its further development at every stage and from every angle. This volume ... is a treasure trove for those who work in this field—teachers, students, and users alike. Its encyclopaedic coverage, due in part to collaboration with other experts, makes it an absolute must."—S. Vajda, Zentralblatt für Mathematik und ihre Grenzgebiete