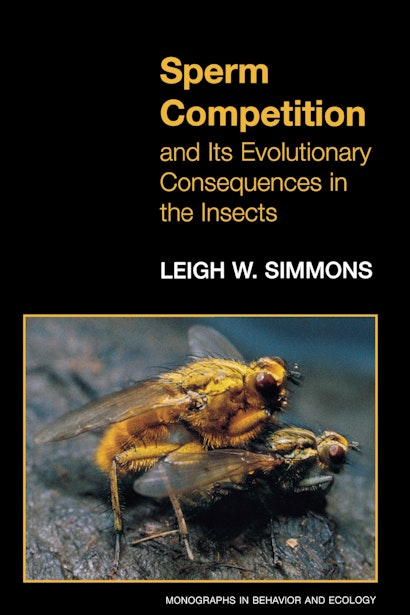 One hundred years after Darwin considered how sexual selection shapes the behavioral and morphological characteristics of males for acquiring mates, Parker realized that sexual selection continues after mating through sperm competition. Because females often mate with multiple males before producing offspring, selection favors adaptations that allow males to preempt sperm from previous males and to prevent their own sperm from preemption by future males. Since the 1970s, this area of research has seen exponential growth, and biologists now recognize sperm competition as an evolutionary force that drives such adaptations as mate guarding, genital morphology, and ejaculate chemistry across all animal taxa. The insects have been critical to this research, and they still offer the greatest potential to reveal fully the evolutionary consequences of sperm competition.


This book analyzes and extends thirty years of theoretical and empirical work on insect sperm competition. It considers both male and female interests in sperm utilization and the sexual conflict that can arise when these differ. It covers the mechanics of sperm transfer and utilization, morphology, physiology, and behavior. Sperm competition is shown to have dramatic effects on adaptation in the context of reproduction as well as far-reaching ramifications on life-history evolution and speciation.


Written by a top researcher in the field, this comprehensive, up-to-date review of the evolutionary causes and consequences of sperm competition in the insects will prove an invaluable reference for students and established researchers in behavioral ecology and evolutionary biology.

Leigh W. Simmons is an Australian Research Council Senior Research Fellow and Research Professor in the Department of Zoology, University of Western Australia. He is an Associate Editor for Behavioral Ecology and Sociobiology and Executive Editor of Animal Behavior.

"Leigh Simmons is better qualified than most to define the current state of sperm competition. This book is an exellent summary of a recent, important, and relatively large addition to our understanding of evolution and its consequences. It is an essential read for anyone interested in the reproductive determinates of fitness."—Michael T. Siva-Jothy, Nature

"This well-illustrated, heavily referenced book will be valuable to researches interested in the evolution of reproductive biology, no matter what group they study."—John Alcock, The Quarterly Review of Biology

"The author succeeds admirably in giving a scholarly, erudite, and up-to-date review of the evolutionary causes and consequences of sperm competition in insects. He covers all the important areas in this field. Simmons is a top researcher in the field of insect sperm competition, knows the literature well, and uses it with skill."—Tim Birkhead, author of Promiscuity

"Leigh Simmons is an outstanding insect behavioral ecologist with an increasingly prominent international stature. Because of his contribution and standing, there will be an immediate appeal of this book, both to established researchers and to graduate students beginning projects in the area. It is written with great clarity, and the scientific integrity shown by the author is impressive. This is an excellent work of high scientific merit—one that makes a real attempt to take a broad and balanced view, while also making fundamental and significant new proposals for study and interpretation."—Geoff Parker, University of Liverpool