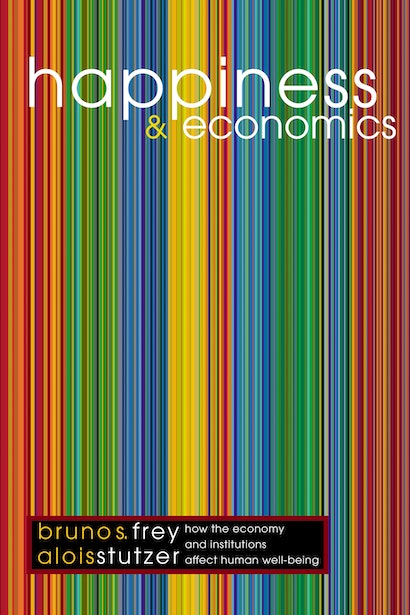 Curiously, economists, whose discipline has much to do with human well-being, have shied away from factoring the study of happiness into their work. Happiness, they might say, is an ”unscientific” concept. This is the first book to establish empirically the link between happiness and economics — and between happiness and democracy. Two respected economists, Bruno S. Frey and Alois Stutzer, integrate insights and findings from psychology, where attempts to measure quality of life are well-documented, as well as from sociology and political science. They demonstrate how micro- and macro-economic conditions in the form of income, unemployment, and inflation affect happiness. The research is centered on Switzerland, whose varying degrees of direct democracy from one canton to another, all within a single economy, allow for political effects to be isolated from economic effects.


Not surprisingly, the authors confirm that unemployment and inflation nurture unhappiness. Their most striking revelation, however, is that the more developed the democratic institutions and the degree of local autonomy, the more satisfied people are with their lives. While such factors as rising income increase personal happiness only minimally, institutions that facilitate more individual involvement in politics (such as referendums) have a substantial effect. For countries such as the United States, where disillusionment with politics seems to be on the rise, such findings are especially significant. By applying econometrics to a real-world issue of general concern and yielding surprising results, Happiness and Economics promises to spark healthy debate over a wide range of the social sciences.

Bruno S. Frey is Professor of Economics at the Institute for Empirical Research in Economics in Zurich. He is the author of Economics as a Science of Human Behavior, Not Just for the Money: An Economic Theory of Personal Motivation, The New Democratic Federalism for Europe and Inspiring Economics. Alois Stutzer is a lecturer on the theory of economic policy at the University of Zurich. He has authored several papers in the fields of public choice, labor economics, and economics and psychology.

"Frey and Stutzer are highly successful in their effort to synthesize—from an economic perspective—happiness research from a variety of disciplines and to extend that research, using an economic orientation."—Choice

"With commendable expertise [the authors] integrate explanations of human well-being from psychology, sociology and political science with the few studies of happiness that have been undertaken by economists. . . . Frey and Stutzer support the unfashionable proposition that subjective well-being is indeed something that economists can and should study, and they marshal a strong case in favor of this view."—David Throsby, Times Literary Supplement

"A major breakthrough in economic research."—R.E. Lane, Journal of Economics

"This is a first-class book. It is a great read whether you are a social scientist or just someone who wants to understand what makes human beings tick. It will even make you happy. Frey and Stutzer's timing is perfect. They have written a marvelous book just as the field is about to take off. Their scholarship is excellent; they write beautifully; the topic is important. Terrific work."—Andrew J. Oswald, Warwick University

"This is a timely, excellent, insightful, and highly readable book by two authors who have an obvious command of their subject. It should become the standard reference text on the rapidly expanding academic study of happiness. It will appeal not only to a wide range of social scientists but also to a wide public audience outside academia. Bruno Frey and Alois Stutzer offer a comprehensive historical account that also reaches to the limits of our current understanding."—Robert MacCulloch, London School of Economics